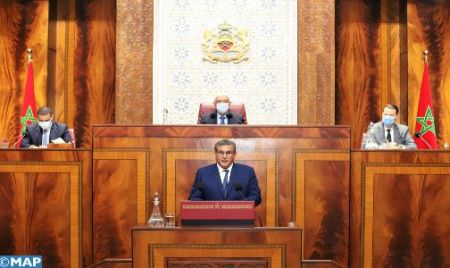 The government is fully aware of the extent of the growing social demand for public service, stressed Monday in Rabat, head of government, Aziz Akhannouch. In response to a central question on the government’s action plan for the consolidation of the social state, during the monthly plenary session devoted to oral questions of general policy, addressed to the head of government, Akhannouch emphasized the Executive’s awareness of the growth of social demand on public service (health, education and job creation). He said that the government will continue its serious action to transcend the shortcomings of social policies, based on its unwavering conviction, reinforced by the Royal projects launched and by a holistic and complementary vision to cement the achievements of the Kingdom in the social field. The government, he added, is aware of the extent of social expectations nurtured vis-à-vis the current government experience, adding that the Executive understands, to its full extent, the nature of the challenges and issues facing the Kingdom and which place the reform of the social sector at the top of the priorities. “We do not pretend, in this governmental experience, that we will undertake social reforms from scratch. We cannot ignore the achievements of others … and we welcome those in which we were involved,” said Akhannouch, noting that the government will ensure that gaps and shortcomings are addressed. He said that the achievement of the social state remains an issue that mobilizes all constitutional institutions and forces of the Nation behind HM King Mohammed VI, in order to implement the contours of the State of social equity and lay the solid foundations of a society in which everyone enjoys security, freedom, dignity, fairness, equal opportunity, social justice and a decent life, within the framework of the correlation between rights and obligations of citizenship. As a contribution to this project, Akhannouch said, the government will work, during its mandate, to consolidate the pillars of the social state by adopting a methodology based on speed in interaction, boldness in execution and courage in decision-making, arguing that strengthening the foundations of the social state is synonymous with actions, decisions and creativity to find the necessary human, technical and financial resources. Akhannouch noted that the reform for the completion of these foundations represents a heavy responsibility for the government, noting that “we will not hesitate, if this reform obliges us, to take decisions that may seem unfair according to a narrow political logic, but which are, in depth, necessary for the implementation of the project of the social state desired by all.” In this context, he stressed that this kind of reforms, especially in the fields of education and health, requires to assume full responsibility and without hesitation, in order to initiate a new decisive stage in the history of the Kingdom, under the wise leadership of HM the King.