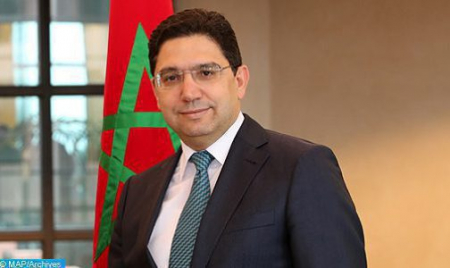 Morocco remains committed to working with China and for Africa, in favor of “pragmatic and united” cooperation, said Tuesday the minister of Foreign Affairs, African Cooperation and Moroccans Abroad, Nasser Bourita. “Morocco remains committed to working with China and for Africa, in favor of pragmatic and united cooperation, dedicated to the benefit of our Continent and which ensures equal treatment to each partner, while being at the optimum of interests of everyone,” said Bourita in a speech read on his behalf by the Moroccan ambassador to Senegal, Taleb Barrada, at the 8th Ministerial Conference of the Forum on China-Africa Cooperation (FOCAC) held in Diamniadio, near Dakar, highlighting the Kingdom’s conviction that “Africa is as important to China as China is to Africa”. Mr. Bourita thus stressed that beyond the Covid-19 pandemic, the Kingdom has always sought to be a catalyst for development and a provider of peace and security in Africa. “This is also why it naturally backs initiatives which, like FOCAC, promote effective, multidimensional and united South-South cooperation,” he pointed out. If Morocco looks forward to FOCAC with confidence, it is because it has the experience of a rich strategic partnership with China, concluded in 2016 by His Majesty King Mohammed VI and the President of the People’s Republic of China, Mr. Xi Jinping. “We believe in the importance of FOCAC, in particular on priority areas for Africa”, the minister said, giving as an example the investment in human capital, in the education of youth and vocational training, technology transfer, industrialization of Africa, or digital transformation in the post-Covid era. Mr. Bourita highlighted, in this regard, the progress made in consolidating the Sino-African partnership, “despite, or perhaps, thanks to common challenges, including the health challenge.” “Building on these successes and the confidence that results from them, we have taken the step of establishing an industrial unit for the production of Covid-19 vaccine in Morocco, which benefits from an unprecedented partnership with the Chinese company Sinopharm,” he stressed, adding that this unit will ensure self-sufficiency and health sovereignty of the Kingdom, while contributing to that of the African continent. The minister, in this regard, affirmed that Morocco is authentically and firmly committed in favor of its Continent and upon the High Instructions of His Majesty the King, the Kingdom has set up an airlift of health and humanitarian aid to more of twenty sisterly African countries, in support of their fight against the pandemic. In addition, he warmly welcomed the announcements made on Monday by the Chinese President with regard to African countries and which revolve around programs covering both health components, structuring projects, green and digital economy and the promotion of trade and investment. “These announcements are the illustration of this partnership to which we all seek, a win-win partnership that creates wealth and opportunities, a solidarity partnership which places people and their development at the heart of our approach”, said Bourita. The Eighth Ministerial Conference of the Forum on China-Africa Cooperation (FOCAC) opened Monday in Diamniadio, 30 km from Dakar. This conference brings together representatives of China and African countries having diplomatic relations with Beijing.