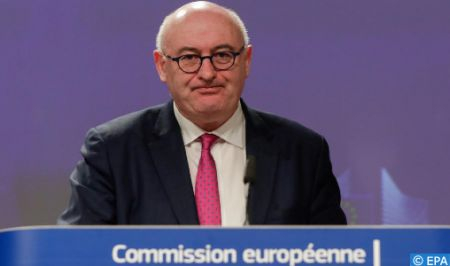 The European Union (EU) and Morocco are exemplary partners who maintain “very fluid” relations, especially since the Kingdom represents a bridge par excellence between Europe and Africa, said Monday in Marrakech, Phil Hogan, former European Commissioner for Agriculture and Rural Development. “The first trade agreements we signed in Africa were with Morocco,” added Hogan in a statement to M24, MAP’s 24-hour news channel, on the sidelines of the 4th edition of the EU-Africa European Business Summit, an annual event dedicated to the promotion and facilitation of trade and investment between the two continents. “Generally, we have very fluid relations with Morocco,” he said, highlighting the importance of further strengthening the Morocco-EU partnership in various areas, including agriculture. In this regard, the former European Commissioner cited the pioneering role of the OCP which “has a great contribution to make not only in Africa in terms of experience, but also in Europe”. For his part, Director General of the European Business Summit, Arnaud Thysen, emphasized the strategic issues represented by Morocco for Europe and Africa. “Morocco has always been a land of meeting between the North and South,” he said. “We rely heavily on Morocco, which really has a key role to play as a bridge par excellence between Europe and Africa. Our African and European partners are very aware of this,” said Thysen, adding that these partners “rely heavily on Morocco to develop precisely this partnership platform”.