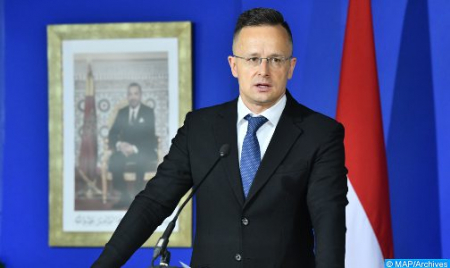 The Hungarian Minister of Foreign Affairs and Trade, Péter Szijjártó, highlighted Monday in Budapest the key role of Morocco in the fight against illegal immigration. “We consider Morocco as a key country in terms of the fight against illegal immigration and we value its role in this area,” said the Hungarian minister at a press conference, following a meeting with the Minister of Foreign Affairs, African Cooperation and Moroccans Abroad, Nasser Bourita. Szijjártó also noted that Morocco, as a strategic country for the stability and development of Africa, is “important” for the security of Europe, stressing the need for the EU to support the Kingdom and its development. He also stressed that Morocco and Hungary share the same perspective on several issues of common interest, adding that the two countries have a similar commitment to security and counterterrorism. Regarding the management of the Covid-19 pandemic, Szijjártó said that Rabat and Budapest had the same approach to vaccination, refusing to take into account “political and ideological” considerations when it comes to protecting human lives. The Hungarian Minister also reiterated the willingness of his country to further develop economic and trade exchanges with Morocco and explore new areas of bilateral cooperation. For his part, Bourita welcomed the “positive” dynamic in bilateral relations between the Kingdom and Hungary, which was boosted by the visit of Szijjártó to Morocco last June. He noted that the two countries have shared views on several issues of common interest, adding that the strengthening of cooperation with Hungary and other countries of the Visegrád group, namely Poland, the Czech Republic and Slovakia, is part of Morocco’s strategy of diversification of international partnerships, guided by the Royal Vision. Bourita stressed that the Kingdom aims to diversify its partnerships within the EU, expanding it to countries of Central and Eastern Europe. He noted that Morocco is the 3rd commercial partner of Hungary in Africa, adding that the Kingdom will work to boost the economic partnership with this country. Bourita welcomed the holding of the fourth session of the Joint Economic Commission, scheduled for Budapest in March 2022, and the convening of a business forum on the sidelines of this meeting. “Morocco is a credible and reliable partner and enjoys great stability, which gives its partners more visibility on cooperation prospects,” he noted, stressing the importance of strengthening triangular cooperation between Morocco, Hungary, and the African continent. He highlighted the African policy of Morocco under the leadership of HM King Mohammed VI, underlining the Kingdom’s strategy on migration and asylum and its efforts to facilitate the integration of migrants. Bourita also had a meeting with the Speaker of the National Assembly of Hungary, László Kövér, which focused on ways to strengthen cooperation between the parliamentary institutions of both countries and give a new boost to bilateral relations between Rabat and Budapest.