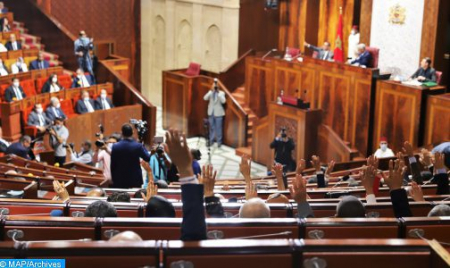 The House of Representatives (lower house) on Monday adopted by a majority the appropriation Bill (PLF) n° 76.21 for the 2022 fiscal year, in the second reading. The bill received the backing of 123 MPs, while 41 opposed it and without any abstention, during a plenary session chaired by the Speaker of the House of Representatives, Rachid Talbi Alami. Earlier in the day, the Committee on Finance, Planning and Economic Development in the House of Representatives adopted the 2022 appropriation bill by a majority, after the approval of several amendments at the House of Advisors. The main amendments adopted include the application of import duty at a unified rate of 2.5% for raw materials used in the treatment of diabetes, as well as the exemption of standard telephones and 32-inch televisions from the ecological domestic consumption tax (TIC) to safeguard the purchasing power of citizens. It also includes the decrease of the tax on the transport of people and goods to 10%, and the exemption from the value-added tax (VAT) without the right to deduct the interests of the loans granted by the credit institutions to the students of private or public education or vocational training dedicated to the financing of their studies in Morocco or abroad and VAT exemption without the right to deduct on recovered metals. Under these approved amendments, companies operating in industrial acceleration zones and service companies benefiting from the special tax system at the Casablanca Finance City will now pay the social solidarity contribution on their profits. These amendments also involve extending the period of registration of the informal sector in the professional register until the end of 2022, in addition to the abolition of fines and increases in tourist transport operations.