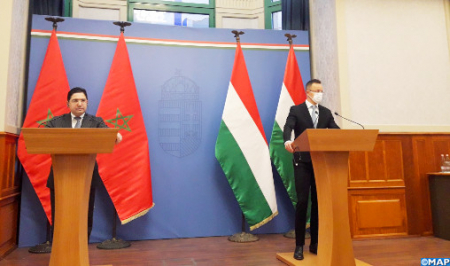 The Moroccan minister of Foreign Affairs, African Cooperation and Moroccans Abroad, Nasser Bourita, on Monday held talks in Budapest with the Hungarian Minister of Foreign Affairs and Trade, Péter Szijjártó. On this occasion, the two ministers welcomed the excellent relations between Morocco and Hungary, while affirming their determination to further consolidate them through cooperation in new areas and the strengthening of consultations on issues of common interest. They also underlined the importance of raising the level of economic and trade cooperation to match the excellence of political relations between the two countries. In this regard, the two officials welcomed the holding of the fourth session of the Joint Economic Commission, scheduled for Budapest in March 2022, and the convening of a business forum on the sidelines of this meeting. Mr. Szijjártó praised the far-reaching reforms undertaken by Morocco over the past two decades under the enlightened leadership of HM King Mohammed VI, while welcoming the New Development Model and the promotion of an advanced regionalization in the Kingdom. He also underlined Morocco’s role as a regional pole of stability, a privileged partner for development in Africa and a source of growth in the region. The Hungarian Minister also reaffirmed his support for the efforts carried out under the exclusive auspices of the United Nations with a view to achieving a political, realistic, pragmatic and lasting solution to the Sahara issue, based on compromise. He also reiterated his country’s support for the Moroccan Autonomy Plan presented to the Secretary General of the United Nations on April 11, 2007 and for the efforts undertaken by the Kingdom for the development of its southern provinces. The Hungarian minister underlined that Morocco, a strategic partner of the European Union, has a decisive and exemplary role in the fight against irregular immigration and against terrorism. Mr. Szijjártó also reiterated the attachment of his country to the strategic partnership between Morocco and the European Union and confirmed his country’s support for the appeal of the Council of the European Union to the Court of Justice of the European Union against the judgments of the European Court on Morocco-EU agricultural and fisheries agreements. The Hungarian minister also reaffirmed his country’s support for Morocco’s candidacy for the United Nations Security Council, the Human Rights Council and the IMO Council. This meeting was also an opportunity for Bourita and Szijjártó to stress the importance of developing cooperation, partnership and dialogue between the EU and its southern neighborhood and with the Euro-African region, in order to provide common responses to all challenges facing these regions, particularly in terms of security, stability, migration and socio-economic and human development. The two ministers thus underlined the importance of promoting triangular cooperation between Morocco, Hungary and their partners on the African continent. Bourita and Szijjártó also welcomed the development of their cooperation at the international level, welcoming, in this regard, the holding, on Tuesday in Budapest, of the first V4 + Morocco Meeting, which will mark, according to the two ministers, the start of a political dialogue between the Kingdom of Morocco and the member states of the Visegrad Group (V4).