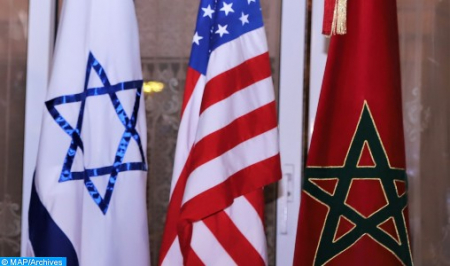 The results of the tripartite agreement, signed a year ago between Morocco, the United States and Israel, are already palpable, said the Moroccan ambassador to Peru, Amin Chaoudri. Speaking at a ceremony held in Lima to commemorate the first anniversary of the Abraham Accords, the Moroccan diplomat mentioned in particular the agreements signed in various fields, the opening and launch of diplomatic representations, the creation of a platform for dialogue and cooperation which includes five sectoral working groups, the establishment of communication channels between business communities and the opening of airspace between the two countries. “This agreement sparked new hope and paved the way for an era of peace, stability, tolerance, harmony and coexistence,” said the Moroccan diplomat, as quoted in a statement issued by the embassy. He noted that this ceremony is also an opportunity to celebrate “the historic decision of the United States to recognize the full sovereignty of the Kingdom of Morocco over the Sahara, as well as its permanent support for the Moroccan autonomy initiative as the only realistic, just and lasting solution to the artificial conflict” over the Sahara. “Relations between Morocco and Israel draw their strength from the long-standing attachment of the Jewish community of Moroccan origin to the Kingdom and the unwavering links between this community and HM King Mohammed VI, Commander of the Faithful, and protector of Moroccans of all faiths and beliefs,” he stressed. Morocco, he added, is the only Arab and Muslim country which recognizes the Hebrew tributary as an identity component in its Constitution, and which works tirelessly, in accordance with the Sovereign’s high instructions, to promote and preserve its Hebrew heritage. Mr. Chaoudri underlined Morocco’s strong commitment and its unwavering attachment to peace, security and prosperity and the Kingdom’s readiness to take advantage of its privileged links with all parties to the Israeli-Palestinian conflict to resume negotiations between the two parties with a view to ending the Israeli-Palestinian conflict and establishing comprehensive peace in the Middle East. For his part, Israeli ambassador Asaf Ichilevich welcomed the restoration of diplomatic relations with Morocco and the achievements and advances made last year, despite the global context marked by the pandemic. The Israeli diplomat expressed his wish to see further consolidated bilateral cooperation, particularly in economic and cultural matters, and to deepen the bonds of friendship between the two peoples, noting that relations between Jews and Morocco have never been severed, thanks to the close ties binding the large Jewish community of Moroccan origin and the Kingdom. The ceremony was attended by several personalities from the political, media, cultural, academic, religious circles, as well as diplomats.