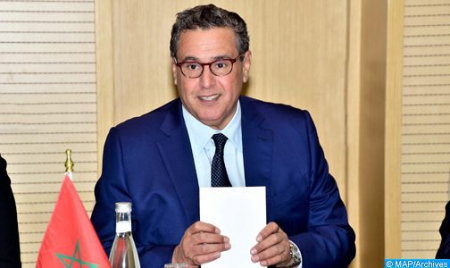 The principles of Open Government find, in Morocco, their counterparts in the constitutional foundations of its legal arsenal, said Wednesday the Head of Government, Aziz Akhannouch. Morocco is one of the countries that “work for a strategy of integrated openness allowing the convergence between different public institutions: Open Government, Open Parliament, Open Justice and Open Local Authorities”, noted Akhannouch, who was speaking by video conference as part of the Open Government Partnership (OGP) Global Summit, which is held in the South Korean capital from 15 to 17 December. These principles of Open Government have been applied to one of the flagship projects in the modern history of the Kingdom, that of the definition of the New Development Model, said the Head of Government, noting that this major project, initiated by His Majesty King Mohammed VI, was designed within the framework of a participatory approach based on openness, listening and mobilization of collective intelligence involving the public administration, civil society, youth, the private sector, political parties, trade unions, academia and citizens in general. This process of consultation and co-creation has involved more than 3 million Moroccans, said Akhannouch, stressing that about 10,000 citizens have participated, effectively, in defining the priorities of tomorrow’s Morocco. “It is with this same approach that Morocco, under the enlightened leadership of His Majesty the King, has established a global and integrated discipline at the level of the various structuring projects of our country”, said the Head of Government. Akhannouch also noted that the challenge of openness and development requires a commitment and collective action at the international level, expressing the wish to see the partnership expand to include more countries, especially African. He expressed the willingness of Morocco to share its experience and consolidate the ties of partnership with sister African countries in order “to meet the common challenges of peace, development and prosperity and the major one, to live up to the expectations of our fellow citizens”. The Head of Government took the opportunity to recall that Morocco has been a member of the Steering Committee of the OGP since October 1st. The election of Morocco to this committee reflects the progress made under the High Guidance of His Majesty King Mohammed VI in areas related to the promotion of participatory democracy, the moralization of public life and the strengthening of the values of transparency and integrity, he stressed, noting that this election also reflects the commitment of the Kingdom and the role it assigns itself within the international community.