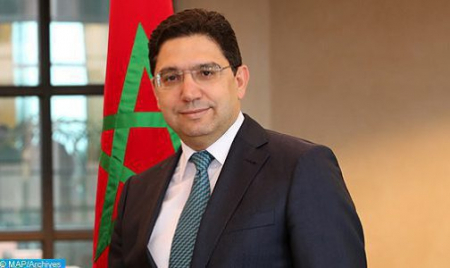 Minister of Foreign Affairs, African Cooperation and Moroccans Abroad, Nasser Bourita, made, Wednesday before the Committee on Foreign Affairs, National Defense, Islamic Affairs and Moroccans Abroad in the House of Representatives, a presentation on draft laws approving nine international agreements. During his presentation, Bourita stressed that these agreements, presented under the constitutional procedure for approval, are part of the fulfillment by the Kingdom of its international commitments and the implementation of the High Royal Directions concerning the expansion of the network of partnerships of Morocco and the diversification of its fields of cooperation with sisterly and friendly countries and regional and international organizations. These are, according to the Minister, two bilateral agreements with the Republics of Chad and Serbia, five regional agreements, three adopted in the African framework and two others in the framework of the League of Arab States and the Organization of Islamic Cooperation, as well as two agreements on multilateral action. The first agreement concerns a framework agreement on cooperation in the fields of energy and mining between the governments of the Kingdom of Morocco and the Republic of Chad, signed on October 26, 2020 in Rabat as part of the consolidation of bilateral relations and enrichment of the contractual framework of their bilateral cooperation, said Bourita, adding that it aims to contribute to the social and economic development of both countries in general, and strengthen cooperation in the sectors of electricity, renewable energy, energy efficiency, hydrocarbons and mining. The cooperation is reflected in an exchange of information, knowledge, experience and expertise, the development of relations between the actors of the two countries in related fields, the exchange of field visits and the organization of training sessions for officials, he explained, adding that both parties will form a joint committee that will oversee the implementation of the terms of the agreement and all activities carried out in this framework. The second agreement concerns military cooperation between the governments of Morocco and Serbia, signed on May 5, 2021 following the willingness of both parties to strengthen their cooperation in this area, said the Minister, adding that it is part of the dynamics of positive bilateral cooperation, which has been strengthened in recent years at the political and economic levels. On the regional level, Bourita said three agreements adopted in the African framework, stating that the first is the African Youth Charter of July 2, 2006, which Morocco joined on August 8, 2009, as part of its adherence to the charters and agreements of the African Union following the return of the Kingdom to its African institutional family, and its involvement in African initiatives aimed at improving the situation of youth in the continent, in line with the policies adopted and the efforts made by Morocco at the national and regional levels for the benefit of African youth. In accordance with the decision of the Executive Council of the Pan African Youth Union (PYU) to transfer its headquarters to Morocco, made on November 10, 2020, the Minister of Youth, Culture and Communication and the Secretary General of the Union signed, on November 11, an agreement establishing in Rabat the headquarters of this body. The second agreement, meanwhile, relates to the African Union Convention on Cybersecurity and Protection of Personal Data of June 27, 2014, which enshrines the freedom to carry out e-commerce activities subject to the law of the country where the persons carrying out the activity are located, establishes the principles of a legal framework for the protection of personal data, and defines the procedural and institutional framework to protect such data through the establishment of a national protection authority that enjoys administrative independence. It also stipulates the adoption of a national cybersecurity strategy and the creation of anti-cybercrime institutions in order to strengthen cybersecurity and combat cybercrime. The third agreement concerns the Abidjan Convention on Cooperation in the Protection, Management and Development of the Marine and Coastal Environment of the Atlantic Coast of West, Central and Southern Africa, adopted on March 23, 1981, and its additional protocols, which stipulate, among other things, cooperation in the prevention of pollution from ships, the dumping of waste from ships or aircraft, and the exploitation of the continental shelf and the sea bed. Within the framework of the League of Arab States, the Minister referred to the Arab Agreement on the Liberalization of Trade in Services of August 24, 2017, aimed at establishing a free trade area in services among Arab countries, setting a general framework for the gradual liberalization of trade in services and the creation of an enabling environment to facilitate the exercise of this activity among them. Bourita also highlighted an agreement concerning the status of the Islamic Organization for Food Security, signed by Morocco on February 25, 2021, under which the organization assesses and monitors the state of food security in member states, mobilizes and manages financial and agricultural resources for the development of agriculture, strengthens food security among member states, and coordinates, develops and implements policies for joint agricultural activities such as the exchange of appropriate technologies. At the multilateral level, the Minister presented the United Nations Convention on International Settlement Agreements Resulting from Mediation (Singapore Convention) adopted in New York on December 20, 2018 at the 73rd session of the UN General Assembly. The text provides for the establishment of a coherent legal framework on settlement agreements that is acceptable to all countries and that contributes to facilitating international trade by enshrining mediation as an alternative to litigation in the resolution of international trade disputes. Bourita also reviewed the Protocol of 1988 relating to the International Convention on Load Lines of 1966, to which Morocco has acceded as part of the harmonization of national legislation with the regulations of the International Maritime Organization.