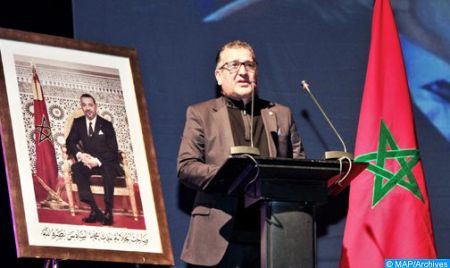 The statement of the German Foreign Ministry about the relationship with Morocco has put a stop to the astonishment aroused by the decision of the Kingdom, said the director of publication of the daily ”Al Itihad Al Ichtiraki”, Abdelhamid Jmahri. In an article entitled ”Germany: innocence with the benefit of the doubt?”, he noted that ”Germany tried to make believe to the international opinion and to its public opinion that it is astonished by the reasons presented by Morocco and that it asked the Moroccan State for clarifications whereas it is it which should do it”. He said, therefore, that the statement of the German diplomacy on relations with Morocco should not be without follow-up as if it was not made public, adding that the Moroccan public opinion should not remain neutral towards the said statement and at the same time, it should not be greeted in haste, with closed eyes. He stressed that the said statement includes three points that it is appropriate to dwell on the form and substance. He noted first that it comes after seven months to the day of the outbreak of the diplomatic crisis between Morocco and Germany, which reached its climax with the recall of the ambassador of the Kingdom in Berlin. It also intervenes against the current in relation to the presentation of official positions on the conditions set by Morocco for a probable common future, recalling that “Morocco had justified the suspension of diplomatic exchanges, by three points mentioned at that time in the statement of Moroccan diplomacy, the same points to which the statement of the German Ministry of Foreign Affairs responds. The editorialist underlined that Morocco had warned against hostile positions aimed at the supreme interests of the Kingdom, especially with regard to the issue of the Moroccan Sahara, recalling that Germany, which presided over the UN Security Council when the United States affirmed its recognition of Morocco’s sovereignty over its Sahara, had called for a special session on the subject, which was considered by Morocco as a blatant interference in the agenda of the said Council and a hostile position towards the Kingdom. He added that the German Foreign Ministry believes in its response on this point that “the autonomy plan is an important contribution by Morocco to resolve the dispute over the Sahara,” while stating that “Germany supports the efforts of the Personal Envoy of the UN Secretary-General, Staffan de Mistura, to achieve a fair, lasting and acceptable political solution on the basis of resolution 2602”. Regarding Germany’s attempt to dismiss Morocco without foundation from some regional conferences on the Libyan crisis held in Berlin, the editorialist said that the statement of German diplomacy recognizes “the major role played by the Kingdom for stability and sustainable development in the region as evidenced by its diplomatic commitment to the Libyan peace process”. He also believed that one of the causes of the crisis lies in the irresponsible attitude displayed by Germany on the subject of terrorists, recalling that the statement of the Moroccan diplomacy had accused the German authorities of ”collusion” with one of the former convicts for terrorist acts. He also noted that this statement made shortly after the inauguration of the new German chancellor underlines that Morocco has made a great step forward in the settlement of the Moroccan Sahara issue. But what attracts attention is the German position on sovereignty. Because, even if one is attached to the presumption of innocence, it remains that this position is ambiguous,” he said, before adding that “this ambiguity is manifested in the fact that Germany evokes the important contribution represented by the autonomy plan, but the fact is that this plan is no longer considered only as an important contribution because it has now acquired the force of res judicata on the international level through UN resolution 2602”. He wrote, in this regard, that “despite the recognition of this resolution as a basis for the settlement of the conflict, it remains that Berlin does not go as far as to admit it and to give this initiative its full importance, adding that judging the German position through the prism of a fierce mobilization against the United States’ recognition of Moroccan sovereignty over its Sahara and the call for a special session on the subject, may lead us to admit that the German recognition of the importance of the Moroccan autonomy proposal is a step forward but, in truth, it remains far below the position of the international community on the subject. In conclusion, Abdelhamid Jmahri stressed that “Morocco takes note of this German position but will still wait for other more daring initiatives, which do not hide behind the partnership with the European Union and which are not content with the bare minimum in common,” saying that in the meantime, “sovereignty has gained points of primary importance and an enshrinement little mentioned by observers”.