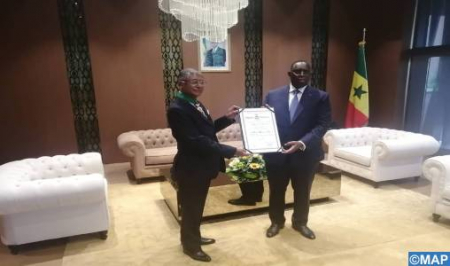 Senegalese President Macky Sall on Thursday received Moroccan Ambassador in Dakar, Taleb Barrada, who paid him a farewell visit at the end of his mission in Senegal. The Moroccan diplomat was elevated by the Senegalese Head of State to the rank of Commander of the National Order of the Lion, one of Senegal’s highest honors. The Senegalese head of State praised, on this occasion, the quality of the excellent relations between the Kingdom of Morocco and the Republic of Senegal in various fields. In this context, he charged Barrada to convey his fraternal greetings to His Majesty King Mohammed VI. For his part, the Moroccan diplomat expressed his recognition and gratitude to President Macky Sall for the support, facilitation and accompaniment for the strengthening of bilateral cooperation in various fields throughout his term in Dakar.