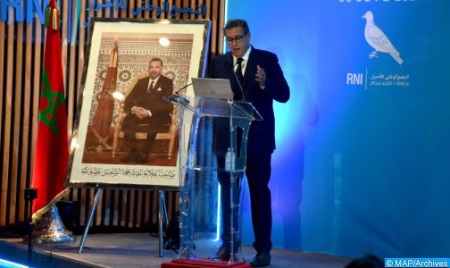 President of the National Rally of Independents (RNI), Aziz Akhannouch, expressed, Saturday in Marrakech, the concern of the parties forming the majority to succeed in the current governmental experience and to work to fully honor their commitments to citizens. Speaking at a communication meeting with party activists in the Marrakech-Safi region, Akhannouch, highlighted the cohesion between all components of the current government majority. In this context, he stressed the importance of enshrining this governmental majority at the level of regions, provinces and prefectures, highlighting the enormous efforts made by the regional coordinators and militants of the party, which allowed citizens to contribute to the strengthening of development and increase voter turnout in elections, in application of the methodology of the party that has worked, relentlessly, to ensure the transfer of political discourse, action and practice from the capital and large metropolises to remote villages and towns. In this sense, Akhannouch, called for strengthening the leadership of the party, through the holding of provincial congresses and unions and the renewal of structures in preparation for the 7th National Congress of the party, while noting the need to invest in “electoral human capital” to enshrine the presence of RNI on the political scene, enhance communication with citizens, and develop a training and communication program to accompany the various programs, including the implementation of the Royal large-scale project of the generalization of social protection.