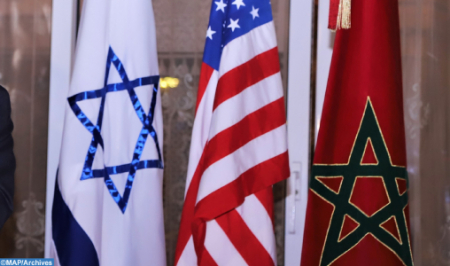 Israeli Foreign Minister Yair Lapid has commended the “significant and tangible” progress made in Moroccan-Israeli relations since the signing in Rabat a year ago of the Morocco-US-Israel Joint Trilateral Declaration. “Over the past year, we have seen and appreciated the significant and tangible progress of our bilateral relations”, said Lapid in an interview with the Moroccan daily newspaper “L’Economiste”, in which he highlighted the achievements of diplomatic rapprochement between the two countries. He recalled, in this regard, his visit to Rabat, the first of its kind in the Kingdom of an Israeli top diplomat for nearly two decades, with the aim of opening a liaison office, stressing that this trip has a “deep personal” meaning for himself and remains an “extremely special” day for millions of his compatriots. Lapid also recalled the signing, on the same occasion, of three agreements on diplomatic, cultural and air issues, which served as a “basis” for the development of bilateral relations. In the months that followed, he added, “we saw direct flights and tourist flows between our two countries (…). Bilateral ties were strengthened in the areas of ​​business and culture, and continuous political dialogue has taken place on several important strategic and regional issues,” he pointed out. He also mentioned the visit to Morocco of the Israeli Minister of Defense, Benny Gantz, which, he stressed, constituted a “major step forward” for bilateral ties in the sector of defense and security, in particular with the signing of the very first memorandum of understanding in this area between the two States. These visits, to which will soon be added that of the Israeli Minister of Economy, “prove the seriousness with which we consider our partnership with Morocco and the Moroccan people, as well as the mutual interest in developing our relations in all sectors,” he underlined. According to the Israeli top diplomat, the deepening of these relations in all fields, which remains one of his “main priorities”, is in the “common interest” of Morocco and Israel, but also of the entire region, especially since “naturally, there is a strong cultural and emotional bond between our two countries, as there are today more than a million Israelis of Moroccan origin”. The relationship between the two countries goes far beyond that, he noted. “We are investing in order to deepen our ties through tourism, culture and even university cooperation. We have a fruitful economic relationship and we expect it to develop significantly in the coming months,” he said. Regarding economic cooperation, Lapid said that the potential of Morocco-Israel collaboration covers a wide range of areas and the two countries are constantly identifying new ones, including water, agriculture, energy, the automotive industry, aerospace and civil aviation. “Today, our two nations face many similar challenges and cooperation in innovation can help us meet these challenges, which will lead to many opportunities for increased investment and trade,” he noted. On this occasion, the Israeli FM deemed as “strategic” the re-establishment of long-term relations between Israel and Morocco. “Our two countries know the advantages that flow from these relations. Each country has its own challenges, both at the domestic and regional level, and cooperation between Israel and Morocco, thanks to the expertise of each country, also incorporates these challenges”, he stressed. The two countries will hold, in the coming months, high-level discussions on strengthening economic cooperation and trade “which will give a boost to bilateral ties, especially that the direct flights will greatly contribute to this,” he added.