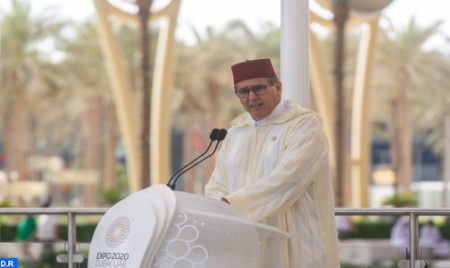 Morocco’s participation in “Expo Dubai 2020” reflects the Kingdom’s commitment, under the leadership of His Majesty King Mohammed VI, to actively contribute to the enrichment of a serious dialogue at the regional and international levels, in favor of a safer and more prosperous future for all, said Sunday the Head of Government, Aziz Akhannouch. Speaking on the occasion of official celebrations of Morocco’s National Day at Expo 2020 Dubai, Akhannouch said he was honored, along with the delegation accompanying him, to kick off, upon the high instructions of HM the King, these historic celebrations, adding that “we are living today, exceptional moments marked by a special honor granted to our country”. “This will allow us to make all the countries of the world discover our centuries-old heritage, our rich history, as well as our tourist, economic, scientific and cultural potential,” he stressed. After reiterating the Kingdom’s gratitude to the United Arab Emirates and the Gulf States for their support to the Moroccanness of the Sahara, Akhannouch noted that this participation also reflects the willingness of Morocco to contribute to efforts to address global challenges through its vision on sustainable development. “Morocco has made its pavilion at the “Expo Dubai 2020” a platform to highlight its new investment and export identity, “Morocco Now”, which aims to outline the position of the Kingdom as a leading industrial exporter and an attractive destination for foreign investment”, he added. “The Moroccan participation in this international event is an opportunity to showcase its strengths, instill a dynamic partnership and consolidate relations between Arab countries as well as South-South cooperation, to achieve the expected prosperity”, he pointed out. “Through the celebration of its National Day, Morocco seeks to highlight the common and distinguished historical background enjoyed by the two countries, which was established by the late HM Hassan II and Sheikh Zayed bin Sultan Al Nahyane and reinforced by HM King Mohammed VI and His brothers, HH Sheikh Khalifa bin Zayed, President of the United Arab Emirates, and Abu Dhabi’s Crown Prince, HH Sheikh Mohamed bin Zayed Al Nahyane, deputy supreme commander of the UAE’s armed forces”, Akhannouch said. In this regard, the Head of Government noted that the strong relations between the two countries are distinguished by unique dynamics at the political, economic, cultural and scientific levels. This exhibition’s theme ‘Connecting Minds, Creating the Future’ reflects with conviction that the return to the origins and history of nations remains an important source for building the future, said Akhannouch, explaining that, from this point of view, the Kingdom of Morocco has adopted the theme “Legacies for the Future, from inspiring origins to sustainable progress”, to highlight its commitment to sustainable progress through its identity, its history, its talents and its potential, as well as its tangible achievements in the economic and scientific fields. Akhannouch also congratulated the United Arab Emirates for their impressive organization of the “Expo Dubai 2020”, noting that “this success of our brothers is a source of great pride for all of us as Arabs, especially since this event is organized for the first time in a brotherly Arab country, and in particular circumstances that the world is experiencing due to the global health crisis”. For his part, Sheikh Sultan bin Ahmad Al Jaber, UAE Minister of Industry and Advanced Technologies, stressed that Moroccan-Emirati relations are strengthening and consolidating more and more, noting that these relations are moving with optimism towards a future marked by fruitful cooperation in several areas. “Morocco and the United Arab Emirates have multiple opportunities to build more partnerships that benefit both countries and the entire Arab region”, he underlined. He also expressed his country’s thanks and gratitude for the distinguished Moroccan participation in the World Expo “Dubai 2020”, praising, in this regard, the design of the Morocco’s pavilion, which combines modernity and originality. The ceremony began, at Al Wasl Square, the beating heart of the expo, by the raising of the flags of the Kingdom of Morocco and the United Arab Emirates, while the national anthems of both countries were playing, in the presence of high-level Moroccan and Emirati personalities from various backgrounds. Expo 2020 Dubai, whose organization was postponed last year due to the Coronavirus pandemic, is held on an area of 4.38 square kilometers, under the theme ‘Connecting Minds, Creating the Future’. It is the first World Expo to be held in the Middle East, Africa and South Asia (MEASA) region.