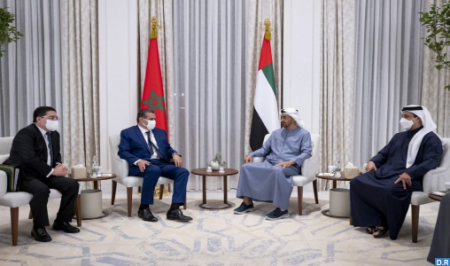 The Crown Prince of Abu Dhabi and Deputy Supreme Commander of the Emirati Armed Forces, HH Sheikh Mohammed bin Zayed Al Nahyan, on Saturday received in Abu Dhabi, Aziz Akhannouch, Head of Government, emissary of His Majesty King Mohammed VI. During this audience, which took place in the presence of Nasser Bourita, Minister of Foreign Affairs, African Cooperation and Moroccans Abroad, Mr. Akhannouch conveyed the greetings of HM the King to HH Sheikh Khalifa Bin Zayed Al Nahyan, President of the United Arab Emirates, and to HH Sheikh Mohammed bin Zayed Al Nahyan, as well as His Majesty’s best wishes for good health and happiness to their Highnesses, and continued progress and prosperity to the State of the United Arab Emirates and its people. For his part, HH Sheikh Mohammed bin Zayed Al Nahyan instructed Mr. Akhannouch to convey his greetings to His Majesty the King, expressing his wishes for further progress and development to the Kingdom of Morocco and its brotherly people, under the wise leadership of His Majesty the King. The two sides reviewed the strong fraternal relations between the two countries and discussed the means to strengthen various aspects of bilateral cooperation, particularly in the areas of investment and economy. They also discussed the situation in the Arab region as well as several regional and international issues of common interest.