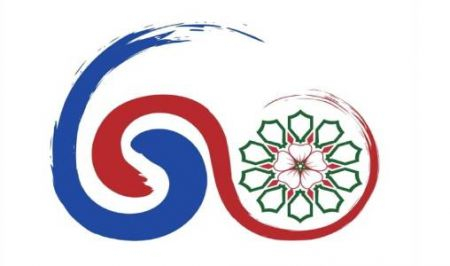 Morocco and South Korea are getting ready to celebrate in 2022, the 60th anniversary of their diplomatic relations with a rich program of activities and events highlighting the excellent cooperation ties uniting the two countries. Thus, the Korea Arab-Society (KAS), in collaboration with the Embassy of Morocco in South Korea and the Embassy of the Republic of Korea in Rabat, has unveiled the official logo chosen for these commemorative events, which will take place throughout the year to give this anniversary all the brilliance it deserves in the image of the excellent relations that have always existed between the two countries. Created by Anas Sidki, a young designer from the city of Afourar, the winning logo was developed in a way that reflects a harmonious blend of the geometric figures of Moroccan architectural art and Korean calligraphy. The national colors of the two countries (red, green and blue), the green star of the Kingdom and the South Korean national flower, the Mugunghwa, stand side by side in the middle of the logo in an air of gentleness reflecting the serene evolution of bilateral relations since their establishment 60 years ago, a figure ingeniously reflected on the logo by drawing inspiration from the Korean symbols, the Yin and the Yang, which adorn the flag of the Asian country. The logo was chosen by a jury among 105 logos submitted by candidates from Morocco and Korea. The second prize was awarded to Chaemin KIM (South Korea) while the third prize was won by Zakariae Edderyouch (Morocco). Speaking at the awards ceremony, held via video-conference due to the Covid-19 pandemic, Morocco’s ambassador to South Korea, Chafik Rachadi, congratulated the winners, highlighting the uniqueness and creativity of the proposed logos. The ingenuity of the competitors reflects the friendly relations between the two countries, said the ambassador, hoping that the various events planned for next year reflect the strength of ties between the two countries and the very promising trajectory of their relations. In this context, he recalled that the first permanent diplomatic representation of South Korea on the African continent was established in Morocco in 1962. Throughout the last six decades, Moroccan-Korean relations have achieved qualitative leaps in all areas, the diplomat said, stressing that the celebration of the 60th anniversary of diplomatic relations between the two countries represents an important milestone in the history of these relations and provides an opportunity to highlight the positive evolution of these ties in all areas.