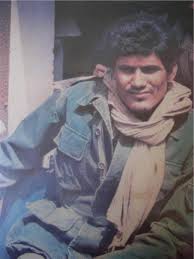 New twists on the mysterious death of the founder of the Polisario Front, El Ouali Mustapha Sayed, suggest that he was murdered by agents of the Algerian intelligence services.
Accoding to the official account made at the time, El Ouali Mustapha Sayed was shot and killed on June 9, 1976, during a Polisario militia’s raid in Mauritania.
But new information cited by a Mauritanian source reveals that it was rather a physical liquidation. According to the source, the plan to kill El Ouali was hatched during a secret meeting that gathered at the Algerian presidential palace the late Algerian President Houari Boumediene, his close aides, including his Jewish advisor, Slimane Hoffman, the current head of state Abdelaziz Bouteflika, who was then Foreign Minister, the head of the intelligence services Kasdi Merbah, in addition to Mohamed Messaadia, former speaker of the upper chamber of the Algerian Parliament.
Boumediene deemed it necessary to kill El Ouali without delay as the latter was reportedly trying to negotiate directly with the Moroccan government a solution to the Western Sahara conflict, reports the Mauritanian website “Akhbar Annass” referring to leaks from the archives of the Algerian military intelligence services (DRS).
Colonel Boumediene who settled the issue by his decision to eliminate El Ouali insisted that the assassination operation is conducted on Mauritanian soil. He entrusted the dirty task to General Atailia Mohamed, aka the Penguin or the Red, who was very close to El Ouali Mustapha Sayed.
In his report, Slimane Hoffman had suggested that once eliminated, El Ouali should be replaced by Mohamed Abdelaziz Marrakchi, who was more faithful to Algerian authorities and more obedient to their orders.
Two months before his assassination, El Ouali actually told one of his companions, Maa al-Aïnine, that he wanted to speed up normalization with the Moroccan government and that he was going to inform Messaadia, a member of the Algerian FLN Central Committee who was in charge of the Polisario within the party, of his intentions.
Thirty eight years after this cowardly assassination, these new revelations suggest that the Polisario founder, who graduated from the Rabat Law School (Mohammed V University) before joining the Tindouf camps, paid very expensively his decision to break with the separatist strategy dictated by Boumediene and the Libyan Colonel Muammar Gaddafi.