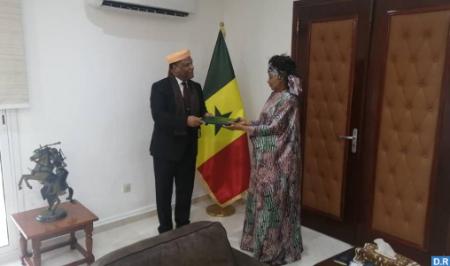 Morocco’s ambassador to Senegal, Hassan Naciri, was received on Monday in Dakar by the Senegalese Minister of Foreign Affairs and Senegalese abroad, Aïssata Tall Sall. During this meeting, Mr. Hassan Naciri presented to the Senegalese FM copies of his credentials as Ambassador of His Majesty the King to the President of the Republic of Senegal, Mr. Macky Sall. The two sides seized this opportunity to underline the exceptional nature of the multidimensional and long-standing relations existing between the Kingdom of Morocco and the Republic of Senegal and the will of the leaders of the two countries to further strengthen them.