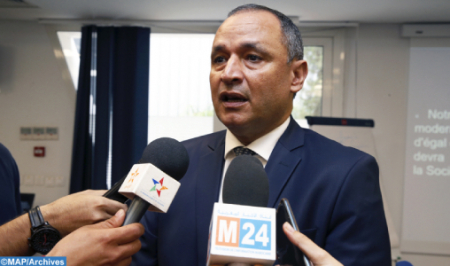 Morocco on Monday called for a new win-win partnership between the European Union (EU) and the African continent, as France holds the rotating presidency for six months of the Council of the EU. “It is necessary to define together a common commercial and industrial pact based on the strengths of Europe as a renewed and innovative industrial power and Africa which offers relays of carbon-free competitiveness in terms of production, innovation and services,” said the minister of Industry and Trade, Ryad Mezzour, who took part part, via videoconference, in an international conference on the theme “European Union-Africa trade relations: towards new partnerships “, held Monday in hybrid format in Paris and which marked the start of the French presidency of the Council of the EU. This international conference seeks to highlight the European partnership with Africa in terms of trade and investment, a few weeks before the AU-EU summit. Recalling that trade relations between Europe and Africa do not date from yesterday and that the association agreements concluded between the EU and the countries of the southern Mediterranean go back to more than 25 years ago, the Moroccan official underlined that “this certainly represents a guarantee of sustainability, but above all it indicates that it is time to revisit them and to define a new balance”. According to Mezzour, it is undeniable that these agreements have fostered increased trade relations and investments between Africa and Europe, as it is undeniable that the EU is a major development partner of the continent. “However, we are now seeing an acceleration in global industrial and commercial tectonics, accompanied by the tightening of value chains, new sovereignty issues and the implementation of measures aimed at achieving carbon neutrality,” he pointed out. The minister stressed in this regard that within the framework of Agenda 2063, the Continental Free Trade Area shows the continent’s desire to promote intercontinental trade relations and stimulate its industrial development. But, “to succeed in decarbonising, strengthening the industrial fabric, improving the competitiveness of African companies and creating jobs on both sides of the Mediterranean, we must build a new win-win partnership,” said the Moroccan minister for whom “North-South-South cooperation must be more ambitious”. This North-South-South cooperation, underlined Mr. Mezzour, must also be part of a joint and complementary approach that includes the maintenance and development of European industries established in Africa, a relocation of Asian value chains in the Euro-Mediterranean-Africa space capitalizing on geographical proximity, reduced logistics costs, a gain in competitiveness, as well as a reduction of the environmental footprint. Still within the framework of this North-South-South cooperation, it will also be necessary to ensure the establishment of joint innovative industrial pathways favoring Industry 4.0, sustainable mobility and energy transition and to secure better access to the European market for African products through harmony between the legal frameworks governing trade, a vertical Europe-Africa integration and providing support to ensure that African products comply with technical regulations. According to Mezzour, the global economy is experiencing a strong but uneven recovery. The emergence of large economic blocs is having an impact on global trade rules, the health crisis having shown that the organization of value chains is also the responsibility of States which must protect their citizens and strengthen the resilience of their economy. However, he said, “it will be a question of avoiding the pitfalls and traps to which imposed relocations could lead, which would not only weaken the competitiveness of some European industrial pavilions, but would also weaken the depth of Euro-African cooperation. “This is why, he said, today the Europe-Africa partnership supported on a mutually beneficial basis must be a priority for both sides in order to consolidate a sustainable regional economic recovery.” He also underlined that “the countries of the two shores of the Mediterranean can count on the support and the mobilization of Morocco for the deepening and the modernization of our agreements and our ambition as regards trade and investment, allowing our two shores to meet together the several challenges we face”. “With regard to Morocco, thanks to the enlightened vision of HM King Mohammed VI, the large-scale structuring projects in the port, airport, industrial reception areas of technologies, renewable energies as well as an industry that is today renowned worldwide for its competitiveness and the know-how of its human capital have increased our attractiveness towards our traditional partners and have attracted new ones,” said the Minister. He stressed, in this regard, that in Morocco, the health crisis has revealed the resilience and ingenuity of the local industry and of its great potential. This is why the economic recovery has been faster there than elsewhere, thanks to the mobilization and commitment of its industrial operators. During the past 25 years, Morocco has equipped itself with world-class infrastructure such as the Tanger-Med port which is a powerful industrial tool, said the minister, noting that the various industrial plans have enabled Morocco to become a powerful industrial base, one of the most competitive in the world, with the assurance of the most advanced decarbonisation and an active export positioning. Thanks to an ambitious government program based on the High Royal Guidelines, in particular the operationalization of a new development model, Morocco fully intends to transform the limits revealed by this health crisis into opportunities, said the Moroccan minister, stressing that the Kingdom is also consolidating its position as the 2nd African investor in Africa with multinationals, particularly in finance, telecommunications, industry and fertilizers.