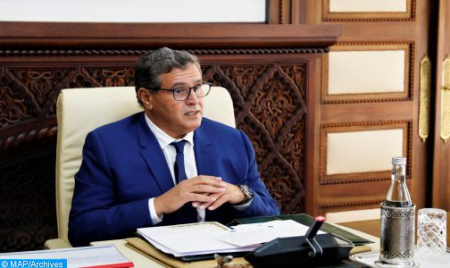 The Head of Government, Aziz Akhannouch, reiterated, Thursday in Rabat, the commitment to continue the process of officialization of the Amazigh language, by placing it in a clear national framework of action and in harmony with the provisions of the Constitution and with the firm Royal will that has strengthened the place of the Amazigh language and culture on the path of consolidation of the national identity, rich in its multiple and diverse tributaries. Since His accession to the throne, HM King Mohammed VI has given the Amazigh language and culture the place they deserve in the building of national identity, through His permanent support to this national tributary and His farsighted instructions that illustrate the strategic sense of the Sovereign since the founding Royal speech of Ajdir in 2001, said Akhannouch at the opening of the Council of Government, convened by video conference. The Head of Government presented, on the occasion of the Amazigh New Year 2972, his congratulations to all citizens, noting that this date embodies one of the declinations and illustrations of the common capital of all Moroccans, said a statement by the Delegate-Ministry in charge of Relations with Parliament, government spokesman. The officialization of the Amazigh language in the constitution is a decision and a Royal will, the government must accelerate the strategic priority large-scale projects stipulated by the organic law No. 26-16 on the stages of implementation of the official character of the Amazigh language and the modalities of its integration in education and in the various priority sectors of public life, and the need to mobilize efforts and human, logistical and financial resources to ensure the implementation of its provisions. In this context, Akhannouch said that the government began its mandate with bold and concrete measures for the promotion of Amazigh, in particular the allocation of 200 million dirhams in the 2022 appropriation bill for the implementation of the official character of the Amazigh language, while committing to gradually raise the ceiling to one billion dirhams in 2025.