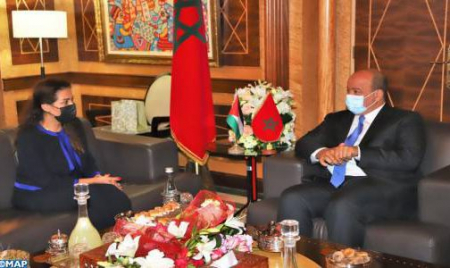 The Speaker of the House of Advisors (upper house), Naama Mayara, held talks, Wednesday in Rabat, with the Jordanian ambassador to Morocco, Jumana Ghneimat, which focused on ways to further strengthen relations between the two countries. During this meeting, Mayara recalled the long-standing, solid and deep ties between the two kingdoms which draw their strength from the distinguished brotherly relations between HM King Mohammed VI and HM King Abdellah II of Jordan, said a statement of the upper house. Mayara welcomed, on this occasion, the level of cooperation existing between the two countries in various fields (economic, tourism and cultural), and the willingness of both parties to build on them further, given the assets and opportunities for cooperation and investment that the two kingdoms have. He referred, in this sense, to the invitation extended to the President of the Senate of Jordan, Faisal El Faiz, to visit Morocco and take part, in his capacity as President of the League of Shura Councils, Senates and Similar Councils of Africa and the Arab World, in the 11th Forum of Parliamentary Dialogue with the Councils of Senates in the region of Latin America and the Caribbean, scheduled for next March in Rabat. He also stressed the importance of examining ways to develop economic cooperation, support investment, achieve development, and facilitate the rapprochement between businessmen on both sides, noting the role that can play in this context the House of Advisors, through its composition which includes economic components, professional and trade unions. For her part, the ambassador of Jordan stressed the strong ties binding the two kingdoms and the two brotherly peoples, advocating the strengthening of bilateral relations and the intensification of the exchange of expertise in the fields of vocational training, renewable energy and tourism. The two sides underlined the importance to strengthen parliamentary cooperation, to intensify coordination and consultation between the Parliaments of the two countries in different regional and international fora, to support all initiatives that promote their supreme interests and their national constants, and to deepen the distinguished relations between the two countries and peoples.