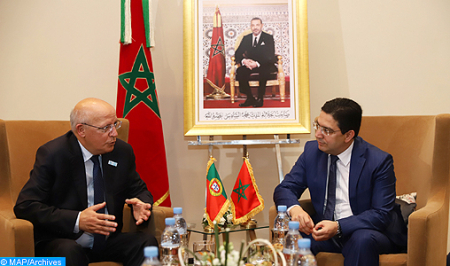 The Minister of State and Foreign Affairs of Portugal, Augusto Santos Silva, on Wednesday welcomed the decisive role of Morocco in promoting stability in the region as well as the Kingdom’s role as a growth driver for development in Africa. The Portuguese official made these comments during a videoconference meeting with the Moroccan minister of Foreign Affairs, African Cooperation and Moroccans Abroad, Nasser Bourita. Talks between the two ministers focused on regional and international issues by confirming the convergence of their views on the serious and credible efforts carried out in this framework for the peaceful settlement of conflicts, says a statement issued by the Ministry of Foreign Affairs, African Cooperation and Moroccans Abroad. Bourita and Santos Silva reaffirmed, on this occasion, the importance of continuing the same dynamic at the multilateral level and within international bodies. They also welcomed the excellence of bilateral relations, while stressing the need to further strengthen them in order to enhance them at the level of the strategic partnership between the two countries, which strengthened their economic relations through the creation last November of a business council whose objective is to refocus priorities, consolidate achievements and explore new innovative avenues for an advanced economic partnership. The Portuguese top diplomat welcomed, in this regard, the large-scale reforms undertaken in Morocco over the past two decades under the enlightened leadership of His Majesty King Mohammed VI and commended the New Development Model as well as the promotion of advanced regionalization in the Kingdom. Regarding the 14th session of the High Level Meeting, scheduled in Portugal, the two ministers agreed to make it an opportunity to develop bilateral relations to match the shared ambitions, through the exploration of new opportunities and the creation of synergies in terms of value chains, investment promotion and triangular cooperation, the statement added. They also welcomed the exemplary management of the COVID-19 pandemic, in light of the success of the vaccination campaign carried out in the two countries. The Portuguese minister reiterated his country’s attachment to the strategic partnership between Morocco and the European Union and affirmed Portugal’s direct support through direct referral to the Court of Justice of the European Union in support of the appeal made by the Council regarding the judgments of the EU Court on the Morocco-EU agricultural and fisheries agreements. At the end of their talks, Bourita and Santos Silva signed the agreement relating to the stay and employment of Moroccan workers in Portugal, which is part of the process of modernizing partnership instruments. The signing ceremony took place in the presence of the Minister of Agriculture, Fisheries, Rural Development, Water and Forests, Mohammed Sadiki, and the Minister of Economic Inclusion, Small Business, Employment and Skills, Younes Sekkouri.