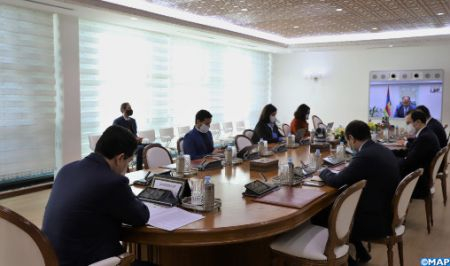 Morocco and the Republic of Mauritius have agreed to initiate a new dynamic of sectoral cooperation by inviting the ministers of both countries to interact in order to assess the implementation of the agreements previously signed and to jointly identify actions and projects to be undertaken in key sectors, such as health, renewable energies and information technologies. This willingness was expressed during talks, held Friday by video conference, between Minister of Foreign Affairs, African Cooperation and Moroccans Abroad, Nasser Bourita, and Minister of Foreign Affairs, Regional Integration and International Trade, and Minister of Transport and Light Metro of the Republic of Mauritius, Alan Ganoo. On this occasion, the two ministers welcomed the friendly relations between the two countries, stressing their shared desire to proceed to a revitalization of bilateral cooperation, through the identification of areas of cooperation to promote a qualitative leap and promote a multidimensional partnership between the two countries, said a statement by the Ministry of Foreign Affairs, African Cooperation and Moroccans Abroad. Bourita and Ganoo also stressed the interest of establishing an ambitious and fruitful cooperation in the maritime sectors, such as port infrastructure, maritime transport, fisheries, aquaculture, protection of underwater cultural heritage and marine renewable energy. As part of strengthening the legal framework governing Moroccan-Mauritian relations, the two ministers agreed on the upcoming signing of agreements finalized between the two countries, the statement added. Aware of the importance of developing their partnership in the economic field, the two officials decided to intensify trade, which remains below the potential of both countries, and encourage the dynamics of cross-investment between Morocco and the Republic of Mauritius, inviting economic operators to multiply missions to explore trade and investment opportunities on both sides. On the multilateral level, the two parties have affirmed their commitment to strengthening consultation and coordination and the pooling of efforts at all levels and on various regional and continental issues of common interest. In addition, the two ministers highlighted the importance of the theme of climate change and the imperative to intensify climate action in favor of a resilient Africa, particularly through the third Island States Climate Commission, which came into being thanks to the Royal initiative launched in 2019 at the Marrakech Action Summit. The Mauritian minister praised Morocco’s efforts in the fight against Covid-19, stressing that the production of the vaccine in the Kingdom is an important step in countering the pandemic at the African level. Finally, the two parties agreed to mutually support the Moroccan and Mauritian applications at the level of regional and international cooperation mechanisms, said the statement.