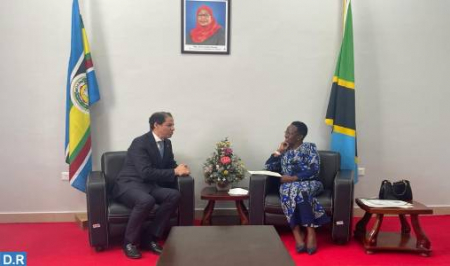 The new Moroccan ambassador to Tanzania, Zakaria El Goumiri, was received Thursday in Dodoma City by the Tanzanian Foreign Minister, Liberata Mulamula. During this meeting, the Moroccan diplomat handed over to the Tanzanian FM copies of his credentials as Morocco’s ambassador to Tanzania. Talks between the two sides focused on the means to strengthen relations between Morocco and Tanzania and the prospects of bilateral cooperation. On this occasion, Mr. El Goumiri recalled that Moroccan-Tanzian relations have seen a major turning point since the visit of His Majesty King Mohammed VI to Tanzania in 2016. The Moroccan diplomat also reviewed the opportunities for cooperation and partnership between the two countries in various areas. He also commended the efforts made by Tanzania in the fight against the COVID-19 pandemic, expressing the Kingdom’s willingness to “develop a bilateral cooperation framework in order to combine efforts in the management of health crises and in other areas, such as the environment, youth and women’s empowerment”. For her part, the Tanzanian Foreign Minister voiced her wish to see Mr. El Goumiri’s experience “helping to channel the efforts undertaken in priority areas of cooperation”. Recalling the historic visit of His Majesty the King during which the Sovereign kicked off the construction of the Great Mosque of Dar es Salaam, Ms. Mulamula underlined the great character of this building and its role at the religious, spiritual and cultural levels for Muslim Tanzanians.