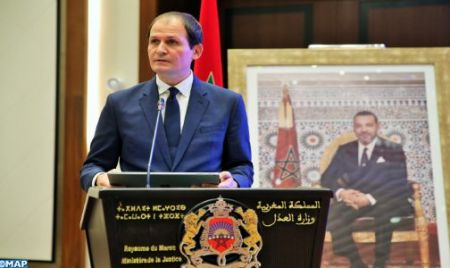 The New Development Model consolidates the rule of law and aims to modernize justice and protect rights and freedoms, said Tuesday in Tangier the resident representative of the United Nations Development Programme (UNDP) in Morocco, Edward Christow. Speaking at an international seminar on judicial procedures digitization, Christow said that the New Development Model consolidates the rule of law and aims to establish a balance between a strong State and a dynamic and responsible society, in which justice is modern and protects rights and freedoms. “The 2011 Constitution enshrines human rights, as universally recognized, thus committing to the edification of a modern State based on democracy and the rule of law,” said the official, congratulating Morocco for the progress made so far, and reiterating UNDP’s commitment to further support it. The rule of law implies the equality of all citizens before the law, fair legislation and respect for human rights, and a legal system that is fair, operational and compliant with international standards, said Christow. He also noted that UNDP programs, concerning the promotion the rule of law, cover several areas of intervention. These include strengthening institutions related to justice and security, as well as improving access to justice. Moreover, the UN official added that the UNDP program “Justice and Rule of Law” is perfectly aligned with the priorities of Morocco, the New Development Model and the governmental declaration which confirms the democratic choice and its mechanisms. He recalled the signing last August of a Memorandum of Understanding between the Ministry of Justice and UNDP to work together on the comprehensive and deep reform of the justice system. He also expressed his hope to contribute, through this strategic collaboration, to the major site of justice reform, desired by HM King Mohammed VI. In addition, Christow noted that in the case of justice, new technologies have great potential today and can fundamentally change the way justice administrations provide services, because a digital justice, combined with the stability and security enjoyed by Morocco, promotes the business environment and investment, and will thus allow the economic takeoff and the creation of opportunities. “It is important, today, to ensure the continued modernization of justice, especially in the interest of vulnerable people but also in the interest of all Moroccans who have the right to accessible and effective justice,” said the official. The program of this seminar, organized by the Ministry of Justice, in coordination with national and international partners, includes several axes related to the presentation of comparative experiences of the legislative basis of the digitization of judicial procedures, and experiences in this area from Senegal, France, the United Arab Emirates, Belgium, the United States and Rwanda, as well as the project of digitization of justice in Morocco and the digitization of judicial procedures in the civil and criminal areas.