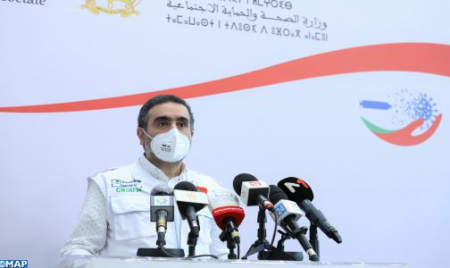 The Omicron variant accounts for 95% of COVID-19 cases in Morocco and the current wave of the pandemic community transmission approaches its peak, the Ministry of Health and Social Protection said on Tuesday. The Kingdom has been undergoing the third wave of COVID-19 for 5 weeks, marked again by a continuous increase in infections, said Mouad Mrabet, coordinator of the National Center for Emergency Public Health Operations, during the bi-monthly assessment of the COVID-19 situation (January 3 to 17). The country has recorded 46,569 COVID-19 cases during the last week, an increase of 33%, said Mrabet, adding that the rate of change, which was 150% during the first weeks of this wave, no longer progresses at the same rate. This, however, does not necessarily mean the entry into a phase of decline. Regarding the weekly evolution of the rate of positivity, the official noted that it has increased from 21.7% to 24.4% during the past week, which shows that the circulation of the virus remains high, despite a certain slowdown. Admissions to resuscitation and intensive care units have begun to increase significantly, with 536 cases recorded during the past week, against 42 cases during the first week of the wave, an increase of 48.1%, he continued, reporting 65 deaths during the same period (+16.1%). Mrabet noted that 70% of deaths are recorded among unvaccinated people, 23% in primo-vaccinated and 7% in people who have not received the third dose of the vaccine. Referring to the national vaccination campaign, he reported a rate of 67.3% for primary vaccinated, 63% for the second dose and 10.5% for the booster shot. The Ministry, once again, calls on citizens to avoid any relaxation, to strictly observe preventive measures in force, and to massively join the vaccination campaign, especially the third dose, which strengthens immunity and helps fighting against the spread of the Omicron variant.