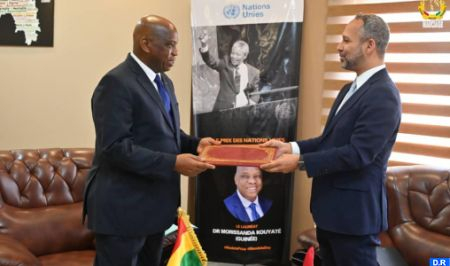 The Ambassador of His Majesty the King to the Republic of Guinea, Isam Taib, was received, on Monday in Conakry, by Guinean Minister of Foreign Affairs, International Cooperation, African Integration and Guineans Abroad, Morissanda Kouyate. During this audience, Isam Taib handed to the head of Guinean diplomacy the figurative copies of the credentials accrediting him as Ambassador of His Majesty the King to the President of the Transition of the Republic of Guinea, Colonel Mamadi Doumbouya. The two officials took this opportunity to reaffirm their commitment to further consolidate the fraternal, long-standing and exceptional relations between the Kingdom of Morocco and the Republic of Guinea, under the leadership of the leaders of both countries.