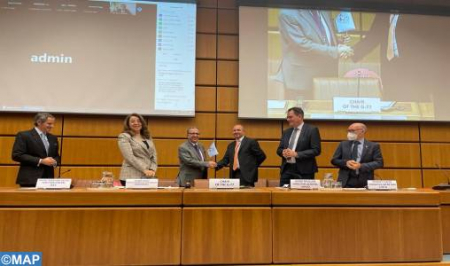 Morocco on Wednesday took over the chairmanship of the Vienna chapter of the G77 for the first time, which reflects the confidence and credibility enjoyed by the Kingdom within international organizations. The handover ceremony of chairmanship of the G-77 took place between Costa Rica’s ambassador in Vienna, Alejandro Solano Ortiz, and the Ambassador, Permanent Representative of Morocco Azzeddine Farhane, in the presence of the Directors General of UNOV, UNIDO and the IAEA respectively Ghada Fathi Wali, Gerd Müller and Rafael Mariano Grossi, as well as the Executive Secretary of the CTBTO, Robert Floyd. Speaking on this occasion, Mr. Farhane noted that the G77 has established itself as the most important forum for developing countries in international fora aimed at guaranteeing their right to sustainable development and promoting their economic and social interests. “It is therefore crucial that we stick together as a united group that believes in consensus as described by Plato in his Crito and Protagoras dialogues”, the diplomat said. “We all know that finding consensus is often a laborious process that requires effort, patience, wisdom and time,” he underlined, noting however that finding a consensus has been “the driving force behind the success of multilateral diplomacy and the effectiveness of the spirit of Vienna”. To ensure greater visibility for the G77 and contribute to strengthening the spirit of the Vienna Consensus, Mr. Farhane stressed the importance of the sustainability of the three G77 sub-groups (Africa, GRULAC and Asia groups). The three subgroups are key elements for the sustainability of the multilateral network, particularly in terms of promoting collaborative actions aimed at reaching consensus on issues of common interest, he pointed out. The Moroccan ambassador also stressed the creativity of the sub-groups which makes it possible to develop ideas, proposals and actions to be undertaken within the framework of the initiatives and multilateral projects that the G77 deems in the interest of the international community. He also underlined that dialogue with the other groups on consensual topics and constructive initiatives could reinforce the spirit of Vienna consensus, as the multilateral architecture of Vienna offers the possibility of positive interaction between the sub-groups of the G77 and other regional groups and enables to engage in mutual support in terms of technical cooperation. The Moroccan diplomat reaffirmed, in this regard, his will to continue working with all the organizations based in Vienna “to consolidate and strengthen international cooperation and respond to the priorities of our Member States, in order to support their development efforts”. “I intend to engage in regular dialogue with all members of the Group and the Chief Executives of Vienna-based organizations to promote and implement the G77 priorities through a dynamic and collaborative approach, with the objective of strengthening a positive dialogue with the EU and other regional groups,” he said. Mr. Farhane expressed his sincere gratitude to the members of the Group of 77 for the confidence they have placed in Morocco to take on this important mission. The G-77 is the largest Inter-Governmental Organization of developing countries in the UN and, as such, provides the means for the countries of the South to articulate and promote their collective economic interests and enhance their joint negotiating capacity on all major international economic issues within the UN system. The G-77 was established on 15 June 1964 and currently comprises 134 member countries. It also has chapters in New York, Geneva, Nairobi, Paris and Rome.