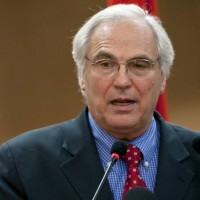 Personal envoy of the UN Secretary General for the Sahara, Christopher Ross arrived Wednesday in the Tindouf camps, after a two-day visit to Algiers.
During his stay in Algiers, the UN mediator met with the Algerian Prime Minister as well as with the Foreign Minister and the Minister for Maghreb and African Affairs.
Unlike his previous visits to Algiers, the envoy was not received by President Abdelaziz Bouteflika, whose health condition is still precarious.
No details on the UN envoy’s talks with the Algerian officials were disclosed. However, according to a Western diplomatic source familiar with the Algerian corridors of power, the Algerian Foreign Minister Lamamra had reportedly conveyed to Ross his country’s discontent about his intention to arrange direct talks between Morocco and the Polisario, without the presence of Algeria and Mauritania.
A Sahrawi dignitary living in Rabouni on his part said that the UN mediator came to the conclusion that the cycle of informal negotiations has not and will not achieve the desired results. So, during his new tour in the region, he will try to convince the Polisario leaders to engage in direct negotiations with Morocco in a bid to reach a consensual settlement to the Western Sahara conflict.
This goal is however difficult to achieve, according to the Sahrawi dignitary, who recalled that the unconfirmed information published last December by our website “Sahara News,” about the UN envoy’s intention to gather Moroccan and Polisario delegations in Sweden without the participation of Algeria and Mauritania, had infuriated the Algerian authorities and media .
On the other hand, Ross’s mission in the Tindouf camps is disturbed by a protest movement staged before the Office of the High Commissioner for Refugees (UNHCR) in Rabouni, since last Tuesday, following the death of two Sahrawis who were recently shot dead by Algerian soldiers near the southern borders with Mauritania.
The families and relatives of the two victims, Mohamed Alian Abbih and Khatri Haddoud Hammad, from the R’guibat and Ouled Cheikh tribes, are claiming the opening of an investigation into the unjustified killings and the prosecution of the persons behind these killings.
Christopher Ross is expected in Rabat as of next Monday after a visit to Mauritania. No information has been disclosed about a possible trip to Western Sahara.
Yet, the outcome of the UN envoy’s talks will not be known before the end of his current tour in the region.