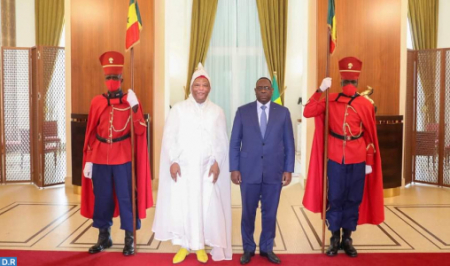 The President of the Republic of Senegal, Macky Sall, received, Tuesday at the Presidential Palace in Dakar, Hassan Naciri who handed him his credentials as Morocco’s ambassador to Senegal. During this audience, President Macky Sall instructed the Moroccan diplomat to convey his fraternal greetings to His Majesty King Mohammed VI, stressing his desire to further consolidate bilateral relations at all levels, the Moroccan ambassador told MAP. Mr. Macky Sall, in this regard, highlighted the “very special” relationship between the Republic of Senegal and the Kingdom of Morocco and expressed his high appreciation for the efforts made by His Majesty the King to promote the modernization and emergence of the country, said Mr. Naciri, noting that the Senegalese Head of State emphasized the importance of regular consultations between the two countries and underlined the need to pursue efforts to step up mutually beneficial economic partnerships. This audience took place in the presence of several Senegalese senior officials, including the Senegalese Minister of Foreign Affairs and Senegalese Abroad, Ms. Aïssata Tall Sall.