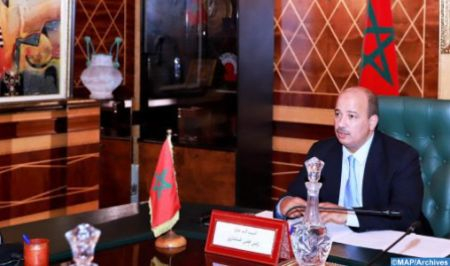 Speaker of the House of Advisors, Naama Mayara, welcomed Tuesday the solidity of the relations of friendship and solidarity between Morocco and Madagascar, stressing the strategic importance given by the Kingdom to the strengthening of its relations with African countries. In a telephone conversation with the president of the Malagasy Senate, Herimanana Razafimahefa, Mayara also stressed that relations between the two brotherly countries are marked by mutual esteem and respect in view of what represents Madagascar on the historical and symbolic levels for the Royal Family and the collective memory of the Moroccan people, and its relationship to the fight for independence by the late Sovereign HM Mohammed V, said a statement by the House of Advisors received by MAP. He highlighted, on this occasion, the strategic importance that the Kingdom attaches to the strengthening of its relations with African countries on the basis of a dynamic, rich and renewed cooperation, in accordance with the proactive vision of HM King Mohammed VI. The speaker of the upper house recalled the multiple royal visits to African countries, marked by the priority given to social, economic and humanitarian dimensions, including the visit made by the Sovereign to Madagascar in November 2016 which represents a turning point in the annals of Moroccan-Malagasy relations, illustrating the common will in favor of a real, pragmatic, structuring and win-win partnership. The statement added that both parties insisted during this telephone conversation on the need to strengthen their coordination and redouble efforts between the parliamentary institutions of both countries, so as to promote the exchange of views and experiences, the unification of positions on bilateral, regional and international issues and through the exchange of visits and the promotion of parliamentary diplomacy for the development of economic, commercial and cultural cooperation. The same source also reported that both parties highlighted the importance of activating the memorandum of understanding signed between the House of Advisors and the Malagasy Senate in September 2017 during the visit of the former president of Madagascar, Honoré Rakotomanana, which instrument aims to promote inter-parliamentary dialogue and strengthen bilateral relations as well as the historical ties uniting the Moroccan and Malagasy peoples.