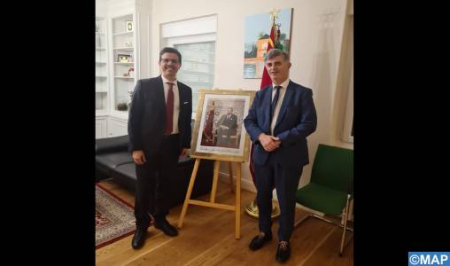 French MP Jacques Maire, member of the Foreign Affairs Committee at the National Assembly and president of the Alliance of Liberals and Democrats for Europe group of the Council of Europe, underlined the importance of Morocco as a “strong partner on which France and Europe can rely”. During talks with Driss El Kaissi, Consul General of the Kingdom in Strasbourg, the French MP stressed that “by its level of development, Morocco fully plays its role as a bridge between Africa and Europe”, says a press release from the Moroccan diplomatic representation in the Alsatian city. On the diplomatic side, Maire and El Kaisssi discussed the role of Morocco in the Libyan crisis and the peace process in the Middle East, particularly since the signing of the Abraham Accords, adds the same source. Regarding the Kingdom’s relations with the Council of Europe, Mr. Maire welcomed the “positive assessment and the dynamic that has marked these relations in recent years, which has materialized through the Kingdom’s accession to several legal mechanisms of the Council of Europe and through important cooperation projects relating to the areas of expertise of the Council,” the release reads.