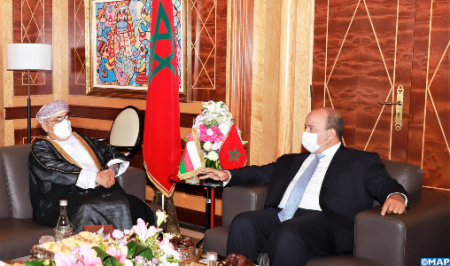 Speaker of the House of Advisors, Naama Mayara stressed, on Wednesday in Rabat, the importance of strengthening cooperation between Moroccan and Omani MPs through the exchange of expertise in areas related to parliamentary action. During a meeting with the ambassador of the Sultanate of Oman, Said Ben Mohamed Al Baraami, Mayara emphasized the importance of strengthening coordination and consultation within the various parliamentary bodies at regional and international levels on issues of common interest, as well as the role played by the Moroccan-Omani parliamentary friendship group in strengthening cooperation ties between the two parliamentary institutions and between the two countries, said a statement by the House of Advisors. In the same vein, Mayara expressed the willingness of the upper house to open up to all joint initiatives likely to consolidate institutional relations and raise them to the level of a productive partnership. He also highlighted the role played by the ambassadors of both countries in strengthening bilateral relations to raise them to a level of strategic partnership, expressing, in this sense, his thanks and gratitude to the Sultanate of Oman for its constant support to the territorial integrity of the Kingdom and the autonomy initiative under the sovereignty of Morocco. The speaker of the House of Advisors also recalled that the Sultanate of Oman has constantly reiterated its position supporting the Kingdom’s territorial integrity on various occasions, both bilaterally and multilaterally. For his part, Al Baraami highlighted the strength of relations between the Sultanate of Oman and the Kingdom of Morocco as well as the two brotherly peoples, praising the level of bilateral cooperation in the economic, commercial and cultural fields. He also stressed the determination of both countries to promote their bilateral cooperation, mentioning the potentialities and important opportunities offered in terms of investment. The ambassador of the Sultanate of Oman also commended the efficient approach adopted by Morocco, in accordance with the High Directions of His Majesty King Mohammed VI, and under the direct supervision of the Sovereign in the management of the coronavirus pandemic, noting that this approach has made the Kingdom a model to follow in the fight against this pandemic.