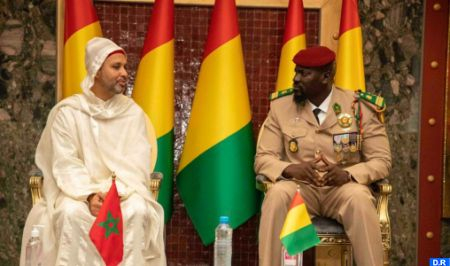 The ambassador of His Majesty the King to the Republic of Guinea, Isam Taib, was received, Friday in Conakry, by His Excellency Colonel Mamadi Doumbouya, President of the National Committee for Rally and Development (CNRD), President of the Transition, Head of State, Supreme Chief of the Armed Forces of the Republic of Guinea. During this audience, Isam Taib presented to the Guinean Head of State his credentials accrediting him as Ambassador of His Majesty the King to the Republic of Guinea. The President of the Transition indicated, on this occasion, that Morocco and Guinea are linked by a historical, multidimensional and fraternal relationship, as evidenced by the name of the Mohammed V Palace, current seat of the Presidency. He took this opportunity to reaffirm his commitment to further consolidate the relations between the Kingdom of Morocco and the Republic of Guinea and strengthen the partnership between the two countries, based on what has been achieved by his predecessors, as in the past.