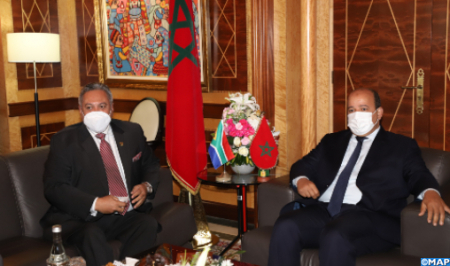 Speaker of the House of Advisors, Naama Mayara, stressed, Friday in Rabat, the firm commitment of the Kingdom of Morocco to consolidate cooperation relations with South Africa. During his meeting with the ambassador of the Republic of South Africa to Morocco, Ebrahim Edries, Mayara noted that the two countries share a common memory, recalling the historic visit of the leader Nelson Mandela in Morocco and his reception by His Majesty Hassan II, said a statement by the House of Advisors. In this regard, the speaker of the upper house highlighted “the strong political will of the Kingdom of Morocco to consolidate cooperation relations with South Africa, especially since Morocco and this country are important poles of political stability and economic development, each on its side, in the extreme north and the extreme south of the continent. In this context, added the statement, Mayara called for the reactivation of the Joint Cooperation Committee to strengthen ties between the two countries. The Committee held its first session in May 1998 in Cape Town. In addition, the official reviewed the position of the Kingdom on the issue of the Moroccan Sahara, recalling in this sense that Morocco has submitted a proposal for autonomy to find a final settlement of this conflict. The Kingdom is committed to international legitimacy and relevant UN resolutions in a bid to consolidate peace and stability in various parts of the world, he added. Regarding parliamentary relations between the two countries, Mayara stressed the importance of the role played by parliamentary diplomacy in promoting the distinguished dynamism of bilateral relations in various fields and at all levels. In this regard, he referred to the 11th session of the Association of Senates, Shoora and Equivalent Councils of Africa and the Arab World next March, a meeting, which will be, according to Mayara, an opportunity to deliberate and consult on the roadmap and future action of the body in the light of the challenges and growing issues at the level of African and Arab regions. Mayara also said that invitation has been extended to the president of the National Council of Provinces in South Africa (upper house), Amos Masondo, to take part in this meeting, highlighting the desire of the House of Advisors to take advantage of its unique and diverse composition in order to establish a parliamentary, political and economic dialogue between the legislative institutions of the two friendly countries. For his part, the ambassador of the Republic of South Africa to Morocco congratulated Mayara for his election as speaker of the House of Advisors, wishing him every success in his noble duties, while highlighting the importance of parliamentary cooperation to invest the great opportunities and potentials available to both countries to diversify economic relations and encourage investment and bilateral trade. The diplomat also mentioned the existence of huge investment opportunities between the two countries, which will inevitably have a very positive impact both bilaterally and continentally.