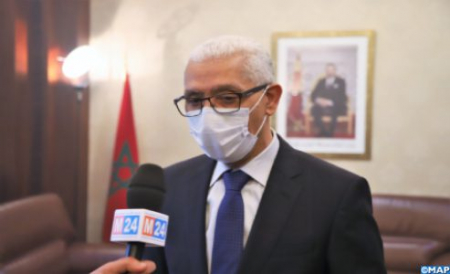 Speaker of the House of Representatives (Lower House), Rachid Talbi Alami, said on Wednesday that the quality of legislative action is dependent on its interaction with the expectations of society in the exercise of the mission of control and evaluation. Speaking at the closing session of the fall session of the legislative year 2021-2022 of the House of Representatives, Talbi Alami said that the lower house has adopted 17 texts of legislation, noting that the review of the Finance Bill has occupied a large place during this session’s work. Highlighting the importance of proposed legislation, Talbi Alami said that members of the legislative institution have developed 69 bills during this session, stressing that the House will ensure that these texts take the path of adoption in accordance with the procedures in force, given their importance in the development of national legislation. “Parliaments of countries with a long democratic tradition currently tend to give more importance to the control of government action and the evaluation of performance, efficiency and impact of public policies, in addition to monitoring the implementation of laws”, he underlined, noting that the Moroccan Parliament has adopted in recent years the same approach. The House of Representatives has constituted during this session a framework for debate and discussion of national issues of great importance, whether at the level of plenary sessions or during meetings of parliamentary standing committees, he added. The debate raised by the parliamentary groups of majority and opposition has placed the citizens’ expectations at the center of the Lower House’ concerns, since it is the most appropriate framework to discuss real issues of society and find solutions. In addition, Talbi Alami reviewed the main topics discussed during the work of the House, both at the level of standing committees and plenary sessions, stressing that they reflect a general trend to study social issues. In this regard, he noted that the number of questions that were discussed in the plenary sessions devoted to monthly oral questions to the Head of Government on general policy, reached a total of 10 questions, while the number of oral questions that were answered by the government members during 13 sessions, reached 276 questions, including 131 oral questions, while that of written questions reached 2,019. The House of Representatives has used in the framework of consensus with the leaders of parliamentary groups and associations, multisectoral evaluation operations to discuss public policies related to the Administrative Reform Plan, Morocco’s Green Plan Plan and the water policy, he noted, adding that these policies are of great importance in the national and geopolitical context, and they are at the heart of the challenges of the 21st century. Regarding parliamentary diplomacy, Talbi Alami said that the components and bodies of the House of Representatives continue their mobilization with vigilance and anticipation, and according to the contours of the diplomatic doctrine of Morocco, in order to defend its vital issues, including the Kingdom’s territorial integrity, at the bilateral and multilateral levels. The participation of the Lower House in the 143rd session of the Assembly of the Inter-Parliamentary Union (IPU), held in Madrid, was an opportunity during which “we began talks with a number of our counterparts on five continents,” he noted. The legislative institution also took part in the conference of the African Parliamentary Union (APU), the Inter-parliamentary Assembly of the Association of Southeast Asian Nations (AIPA – ASEAN), and the Bureau of the Parliamentary Assembly of La Francophonie (APF). These events were an opportunity to defend the interests of the Kingdom and to highlight the reforms undertaken by the Kingdom and discuss the issues of peace, stability and climate justice. Talbi Alami recalled the date of January 1st, 2022, when he assumed the presidency of the Parliamentary Assembly of the Union for the Mediterranean, which is a parliamentary mechanism for the Euro-Mediterranean partnership, and in which “our country enjoys a privileged and valued place”. As part of the diversification of partnership programs and international cooperation, Talbi Alami noted that the partnership of the House of Representatives with the European Union and a number of national and European parliaments, as well as with the Parliamentary Assembly of the Council of Europe have been strengthened, adding that a new project of institutional twinning funded by the EU with seven legislative institutions has been approved. This project is led by the French National Assembly in partnership with the Czech and Belgian Council of Representatives, with the support of the Italian Council of Representatives, the Greek Council of Representatives, the Assembly of the Portuguese Republic and the National Assembly of Hungary, he added. This twinning, in line with other cooperation programs with institutions from the Anglo-Saxon and American world, embodies collaboration between the House of Representatives and European national parliaments, Talbi Alami underlined, noting that this project will facilitate dialogue with these partners, promote the exchange of experiences, visits and study projects, as well as the mutual exploration of parliamentary practices.