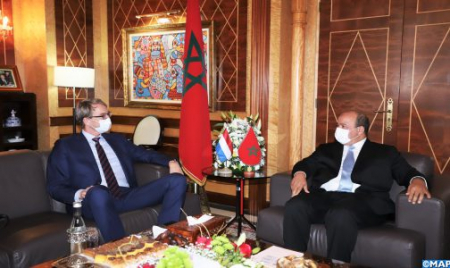 The Speaker of the House of Advisors, Naama Mayara, on Wednesday held talks with the Dutch Ambassador to Morocco, Jeroen Roodenburg. This meeting was an opportunity for the two sides to highlight the depth and richness of the relations that the two countries have maintained for more than 4 centuries and which are currently experiencing a new dynamic which led to the signing, in July, 2021, of an action plan aimed at further promoting them within the framework of mutual respect and taking into account common interests, the Upper House said in a press release. On the economic level, Mayara called for the mobilization of all means to strengthen economic cooperation, in particular through collective reflection on an innovative mechanism to acquire a strategic framework that can contribute to taking advantage of the potential and opportunities offered by the economies of the two countries, to stimulate investment and trade and to establish closer cooperation in the area of energy transition. With regard to the Moroccan Sahara issue, the Speaker expressed his consideration for the steadfast position of the Netherlands, its impartiality and its permanent support for the efforts of the UN Security Council, the Secretary-General of the United Nations and of his Personal Envoy for the Sahara, with a view to achieving a definitive political solution to this artificial conflict. Regarding parliamentary relations between the two Kingdoms, he underlined the importance of working together to strengthen the bases of cooperation and consultation between the legislative institutions of the two countries. He also announced his intention to extend an invitation to the Speaker of the Dutch Senate to pay a working visit to Morocco, in order to discuss the means to raise the level of parliamentary cooperation, to exchange experiences in the various fields of parliamentary action and coordinate points of view and visions on issues of common interest within international parliamentary fora. Recalling the efforts made by the two countries during their co-presidency of the Global Counterterrorism Forum, Mayara praised the level of cooperation between the two Kingdoms in the areas of migration and the fight against terrorism. For his part, the Dutch ambassador commended the solidity of the relations of cooperation and friendship between the two Kingdoms, stressing the importance of parliamentary cooperation in exploiting the great potential of the two countries, diversifying economic relations and promoting trade. The diplomat also hailed the leadership of Morocco on several issues, including migration, the fight against terrorism, renewable energies and development, noting that it is possible for the two countries to further strengthen their cooperation in the fight against terrorism, cybercrime and climate change. The two sides emphasized during this meeting the need to deepen bilateral cooperation relations, particularly at the parliamentary level, stressing the importance of the exchange of visits and expertise in the achievement of this objective, the release read.