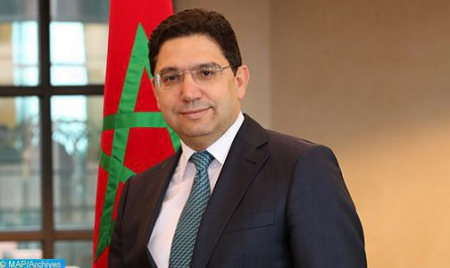 The real parties involved in conflict situations must assume their responsibility, said Wednesday the Minister of Foreign Affairs, African Cooperation and Moroccans Abroad, Nasser Bourita, at a ministerial meeting of the UN Group of Friends of Mediation, held virtually. “Despite the unique legitimacy conferred on them by the UN, mediators cannot replace the real parties involved in conflict situations,” Bourita stressed at this annual meeting, co-chaired by Turkey and Finland. The minister stressed, in this regard, that these real parties must assume their responsibility in the creation and maintenance of the conflict, noting that “without a real political will on the part of these parties, the success of the mediation will remain elusive, even impossible to achieve.” Bourita noted that the unique legitimacy of the UN in conducting facilitation and mediation processes “must be safeguarded against the proliferation of initiatives that, at best, weaken UN-mandated processes and, at worst, jeopardize the chances of success.” The minister also pointed out that in line with the vision of HM King Mohammed VI, Morocco has embarked on several mediation initiatives, including in the Mano River region, in the Sahel, in the Middle East and in Libya, driven by its unfailing attachment to the peaceful settlement of conflicts and its conviction in the value of diplomacy. Emphasizing that Morocco insists on the need to strengthen mediation in the current UN peace and security architecture, he noted that mediation has proven to be an “important” mechanism in the prevention of conflicts as it has demonstrated its ability to adapt to profound changes in disputes. “In the post-Covid world, mediation will gain in importance all the more as the challenges grow in magnitude and become more and more complex,” the minister underlined, adding that the boundaries between the different phases of prevention, management and conflict resolution will continue to dwindle as conflicts take on a more complex and multidimensional form. He also noted that the United Nations has “impressive” capital in the area of ​​mediation, adding that Morocco welcomes the Secretary-General’s “Our Common Program” initiative in this regard, which emphasizes the imperative to strengthen the capacity of the United Nations in the prevention and management of conflicts. The Moroccan official also insisted that national ownership of conflict prevention and resolution is a “fundamental” principle of any mediation process, as evidenced by the Libyan crisis. “With no hidden agenda, the approach that Morocco constantly advocates is to ensure that the Libyan parties exercise national ownership of the political process, while affirming the importance of the good offices of the United Nations to promote the convergence of positions,” he pointed out. The minister said that the mediation of the 21st century must be able to count on coalitions of Member States that are committed to advancing the agenda of mediation as a tool of preventive diplomacy. In this regard, he noted that the Group of Friends of Mediation constitutes a solid platform for sharing best practices, defending the centrality of the United Nations and promoting the common vision for the future of mediation. The Group of Friends of Mediation was founded on 24 September 2010, to promote and advance the use of mediation in the peaceful settlement of disputes, conflict prevention and resolution, as well as to generate support for the development of mediation.  The members of the Friends of Mediation are committed to promoting a culture of mediation in their national policies, as well as regionally and internationally.