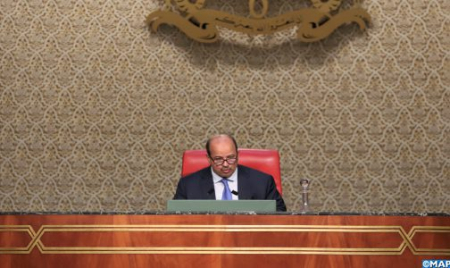 The House of Advisors (upper house) wrapped up, on Wednesday, the first session of the 1st legislative year of the 11th legislature (2021-2026). The House Speaker, Naama Mayara, stressed, in a speech at the closing session, that this session opened its work in a particular context, insofar as it is the first parliamentary session of the two new Houses of Parliament, resulting from general elections – local, regional, national and professional chambers – which allowed the formation of a majority which gave rise to a new coherent government. Mayara underlined, on this occasion, the strong messages contained in the speech of His Majesty King Mohammed VI to the Parliament on the occasion of the opening of the current legislature, in particular the importance for the institution to support the operationalization of the new development model. In this regard, he called on the components of the House of Advisors, majority and opposition alike, to be inspired by the content of this Royal speech and to always bear in mind the foundations of the Morocco of tomorrow as desired by His Majesty the King, by being a driving force capable of bringing real and tangible added value to this great national effort. Mayara underlined that the House of Advisors, has, since the election of its members, undertaken its action, by engaging in consultations between its components in order to form its internal organs in a record time imposed by a binding constitutional agenda, in particular the discussion of the government program and the adoption of the draft 2022 finance law before December 31, 2021. The Speaker recalled, in this regard, that once the finance bill was elaborated, the House’s various components mobilized to ensure that everything took place under the best conditions, in the strict respect of deadlines, whether at the level of the Finance Committee or the rest of the standing committees and plenary sessions. The examination of this project and the deliberation lasted about 160 hours, during which the balance sheet and perspectives of the various sectors and institutions of the State were presented, said Mayara, noting that the various components of the House brought 254 amendments, of which 39 were accepted, ie a rate of nearly 40%, taking into account the amendments withdrawn and those rejected. Regarding relations with constitutional institutions, he emphasized the approach of complementarity and cohesion, adopted between the presidency and the office of the House of Advisors and the presidency and the office of the House of Representatives, thereby facilitating decision-making on several issues, also highlighting the cooperative relationships between the House and all constitutional institutions. The Speaker also underlined the Upper House’s determination, in coordination with the House of Representatives, to comply with these institutions on the legal level, by agreeing to the simultaneous opening of projects to reform the internal regulations of the two Houses, in order to strengthen and to further promote relations with these institutions. In terms of parliamentary diplomacy, Mayara referred to several events that marked this first session, in particular his participation at the head of a high-level delegation in the 143rd Assembly of the Inter-Parliamentary Union, held in Madrid, as well as at the meeting to launch the Parliamentary Network of the Non-Aligned Movement, noting that within the framework of the dynamics of diplomatic action, and as President of the Association of Senates, Shura and Equivalent Councils of Africa and the Arab world, he presented the Association’s work program for the 2022-2023 financial year. He added that, in accordance with the High Instructions of His Majesty the King, which frame official and parallel diplomacy and set out the main priorities in order to defend the supreme interests of the country and defend its just and legitimate causes, this session was marked by the signing of a cooperation agreement between the two Houses of Parliament and the Ministry of Foreign Affairs, African Cooperation and Moroccans Abroad, represented by the Moroccan Academy of Diplomatic Studies, in concretization of the common will to establish an institutional framework of constructive and integrated cooperation, and as a prelude to a new phase of cooperation and continuous consultation which will make it possible to strengthen the national diplomatic performance and to consolidate the positioning of the Kingdom at the continent and international levels. Concerning the openness of the House to its environment and its contribution to the promotion of public debate, Mayara noted that the upper house continued to work in favor of the promotion of this strategic choice, by hosting or participating in the organization of some dialogue activities.