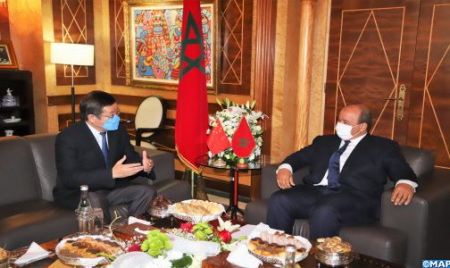 The Speaker of the House of Advisors (Upper House), Naama Mayara, on Thursday held talks with the ambassador of the People’s Republic of China to Morocco, Li Changlin. During this meeting, Mayara welcomed the strong relations binding Morocco and China, marked by mutual respect and esteem, noting that the official visit of HM King Mohammed VI to Beijing in 2016 has opened up promising prospects to raise bilateral relations to the level of a comprehensive strategic partnership, said a statement by the Upper House. Mayara also welcomed the cooperation initiatives undertaken in the fight against the pandemic, which have contributed to the strengthening of Sino-Moroccan relations. In addition, he mentioned the new development model of Morocco, conducted under the enlightened leadership of His Majesty King Mohammed VI, stressing the importance of the geo-strategic location of Morocco, which is a fundamental pillar in strengthening the partnership and cooperation between the two countries. Mayara also highlighted the unique and diverse composition of the House, strengthened by the representation of business leaders, and the role that this component can play in the development of an efficient economic parliamentary diplomacy, emphasizing, in this regard, the importance of bilateral parliamentary cooperation to expand consultations between the two legislative institutions and serve the common interests of the two friendly countries. Regarding the Moroccan Sahara issue, the speaker of the house of advisors underlined the growing international support for the Moroccan autonomy initiative in the southern provinces, considered as a fair and lasting solution to end this artificial regional conflict. For his part, the Chinese diplomat stressed the excellence of strategic relations between Morocco and China, which have received a new impetus thanks to the Royal visit to Beijing in 2016, and the initiatives undertaken by the two Heads of State to consolidate bilateral relations and deploy the strategic partnership in various areas. Relations between Rabat and Beijing have expanded in recent years to the economic, industrial, cultural and scientific and health fields, Changlin said, praising, in this regard, the bilateral cooperation in the wake of the COVID-19 pandemic. The Chinese ambassador also highlighted the momentum recorded in relations between the two countries at all levels, including diplomatic, economic and scientific areas, noting that China, alongside its economic actors and investors, has a great interest in Morocco, which offers multiple opportunities. The two sides emphasized the need to intensify efforts to take advantage of all opportunities to deepen the partnership relations between the two friendly countries, through, among others, parliamentary action, exchange of visits and sharing of experiences, the statement concluded.