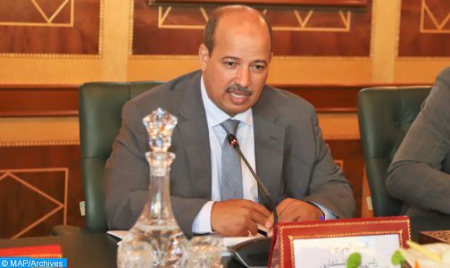 The Speaker of the House of Advisors (upper house), Naama Mayara, on Friday held talks in Rabat with the Cuban ambassador to Morocco, Javier Domokos. During this meeting, Mr. Mayara congratulated Mr. Domokos, appointed new ambassador to the Kingdom, stressing that Morocco is keen to build up good relations marked by respect and esteem with Cuba, says a press release issued by the upper house. He also highlighted the new dynamic instilled in relations between the two countries with the historic visit made by HM King Mohammed VI to this country in April 2017. With regard to the Moroccan Sahara issue, Mr. Mayara highlighted the inhuman and tragic situation endured by populations held against their will in the Tindouf camps, in southern Algeria, stressing that the Moroccan autonomy initiative, proposed by the Kingdom, constitutes a fair and lasting solution to put an end to this artificial regional conflict over the southern provinces within the framework of Morocco’s sovereignty, its national unity and its territorial integrity. He also called for the intensification of exchanges of visits between parliamentarians of the two countries, while extending an invitation to the speaker of the Cuban parliament to pay a working visit to Morocco with a view to discussing the various means to strengthen bilateral relations. For his part, the Cuban diplomat expressed his country’s desire to consolidate relations with Morocco in all areas, while welcoming the measures taken by the Kingdom to fight against the COVID-19 pandemic. Mr. Domokos also praised the development that the Kingdom has experienced at different levels, expressing Cuba’s determination to strengthen the foundations of a South-South relationship to serve the interests of the populations of the region, especially after the great expertise that his country has accumulated in the fields of health and biotechnology. In the same regard, he reviewed the reforms and changes underway in Cuba, emphasizing his determination to work for rapprochement between Rabat and Havana. The two sides stressed the need to intensify efforts to take advantage of all the opportunities offered, in order to deepen the partnership relations between the two friendly countries, as well as the importance of parliamentary dimension in the promotion of bilateral relations through the exchange of visits and expertise. They also underlined the strong political will that drives the two countries to strengthen and expand the scope of their bilateral partnership, the statement concludes.