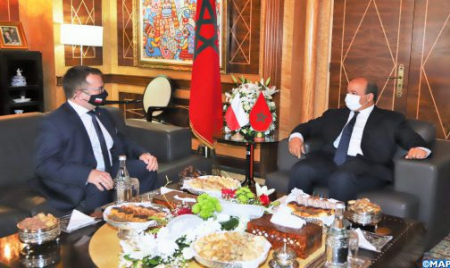 The Speaker of the House of Advisors (Upper House), Naama Mayara, on Thursday held talks with the ambassador of the Republic of Poland to Morocco, Krzysztof Karwowski. During this meeting, Mayara expressed his satisfaction with the friendly relations between Morocco and Poland, marked by esteem and respect, saying that the dialogue and regular political consultations between the two countries reflect their firm commitment to consult on current issues, the Upper House said in a statement. Mayara also mentioned the new development model of Morocco, led by HM King Mohammed VI, highlighting the importance of the distinguished geo-strategic location of Morocco which is a motivation for Poland to explore new African markets. Morocco is one of the main trading partners of Poland among the countries of Africa and the Middle East, especially since the economic cooperation between the two countries is promised to a more prosperous future thanks to the various assets and the common will to move forward towards a fruitful partnership, he said. In addition, Mayara highlighted the unique and diverse composition of the House, strengthened by the representation of business leaders, and the role that this component can play in the development of a parliamentary and economic diplomacy, voicing, in this regard, the willingness of the Upper House to consolidate its partnership with the Polish Senate. He also stressed the importance of parliamentary cooperation between the two countries and its role in expanding consultation between legislative institutions in the common interest of the two friendly countries, praising, in this regard, the position of Polish MPs who contribute significantly to strengthening the political dialogue between the two countries and provide valuable support to the Kingdom through several initiatives. Regarding the Moroccan Sahara issue, the speaker of the house of advisors underlined the favorable position of the international community regarding the Moroccan autonomy plan, considered as a fair and lasting solution to end this artificial conflict, within the framework of the Kingdom’s sovereignty and its national and territorial integrity. For his part, the Polish diplomat recalled on this occasion the strong cooperation and friendship between Rabat and Warsaw, reiterating the support of his country to the major development projects undertaken in Morocco, a traditional partner of Poland. Despite the constraints related to the health crisis, the two countries have recorded an “exceptional and significant” increase in their trade, Karwowski noted, adding that data of the first months of the current year showed a very positive trend. These figures reflect the remarkable relations between the two countries as well as the dynamism of bilateral cooperation in diplomatic, economic and scientific areas, the ambassador said, noting that Poland and its economic actors and investors attach particular interest to Morocco, which, according to him, offers various opportunities, especially through its efforts in the sectors of renewable energy, agriculture and agribusiness. In this regard, the Polish diplomat stressed that his country considers Morocco as a gateway to Africa, praising the potential of the Kingdom. The two sides emphasized the need to intensify efforts to take advantage of all opportunities to deepen the partnership relations between the two friendly countries, in addition to the importance of the parliamentary dimension in improving bilateral relations through the exchange of visits and experiences, stressing their strong political will to strengthen and expand the range of their bilateral partnership, the statement concluded.