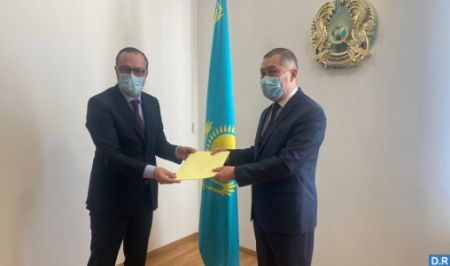 The ambassador of His Majesty the King in Kazakhstan, Mohammed Rachid Maaninou, handed on Friday in Nur-Sultan, the figurative copies of his credentials to the deputy minister of Foreign Affairs of Kazakhstan, Shakhrat Nuryshev. This meeting was an opportunity for both parties to highlight the excellent relations between Morocco and Kazakhstan and the interest of both countries in the development of their ties. They also stressed the importance of advancing these relations to the level of the aspirations of both Heads of State. Convinced that the two countries have a large potential, the two officials exchanged views on some areas of cooperation to strengthen bilateral relations, especially in the political, economic and commercial fields. HM the King’s ambassador expressed to the deputy minister his determination to work, in accordance with the High Royal Directives, to raise to the highest level cooperation relations between the Kingdom and the Republic of Kazakhstan.