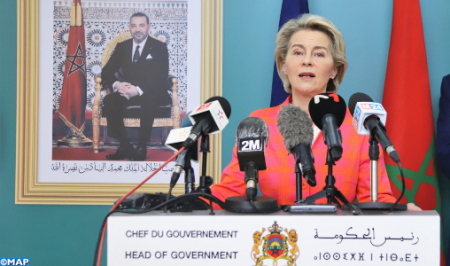 The President of the European Commission, Ms Ursula von der Leyen, expressed, Wednesday in Rabat, her deep condolences to the Moroccan people, following the tragic death of the child Rayan, who fell accidentally into a well in Chefchaouen. “The whole world has held its breath in the face of this tragedy”, underlined Ms. von der Leyen during a joint press briefing with the Head of Government, Aziz Akhannouch, at the end of their talks, expressing her deep condolences to the parents of the child and to all the Moroccan people. She also praised the “superhuman” efforts of the rescuers. “We are by your side in these difficult times,” said Ms. Ursula von der Leyen, who began a visit to Morocco on Tuesday, the first of its kind in the Kingdom in her capacity as President of the European Commission. Rayan was laid to rest Monday in the town of Tamorot. This tragic accident sparked an outpouring of solidarity at the national and international levels.