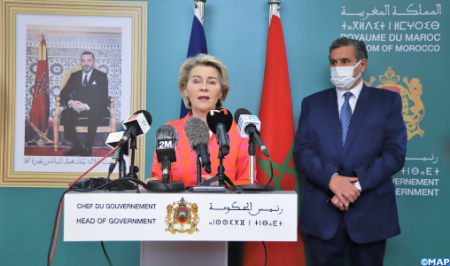 The President of the European Commission, Ursula von der Leyen, reaffirmed, Wednesday in Rabat, the will of the European Union (EU) to continue to deepen the “strategic, close and solid” partnership with Morocco. “Morocco is a country with which we have built a strategic, close and solid partnership”, underlined von der Leyen during a joint press briefing with the Head of Government, Aziz Akhannouch, at the end of their talks, highlighting the “historic” links between the two sides. “I reaffirm our desire to continue to deepen our relations as neighbours, as partners and as friends”, she added, noting that her talks with Mr. Akhannouch were an opportunity to see that this will is reciprocal. “It is therefore together that we can build up a common and ambitious vision of our partnership,” said the European official. Mrs von der Leyen, who was delighted with her first visit to the Kingdom in her capacity as President of the European Commission, recalled that Morocco is the EU’s leading partner in economic and commercial terms at the level of the African continent. She also highlighted the contributions of Europeans living in Morocco and Moroccans living in Europe to the mutual enrichment of cultures that have influenced each other for centuries. The European official pointed out that the meeting with the Head of Government was an opportunity to discuss the global challenges facing Morocco and Europe, adding that in order to meet these challenges, both sides must find solutions together within the framework of their partnership. She said, in this regard, that her discussions with Mr. Akhannouch focused on the main issues of common interest, citing, among others, the development of a green partnership, the first developed with a partner country. Von der Leyen explained that the objective of this partnership is to engage together in the development of green energy, adding that the two parties also cooperate in the development of the connectivity of society through a broad digital partnership. “A lot can be done to further integrate our economies and better adapt them for the benefit of our companies, their employees and all workers”, she said, emphasizing “the attention paid by the EU to the role of youth and their crucial contribution to the progress of our societies and to the efforts we must undertake to offer them the best possible future”. She also underlined the importance attached by the EU to education and culture in its cooperation with Morocco, welcoming the ambitious vision within the framework of the New Development Model led under the leadership of HM King Mohammed VI. The EU official stressed that this model echoes many of these shared ambitions and goals. Beyond bilateral cooperation, the EU is counting on Morocco in the implementation of the new Agenda for the Mediterranean, she said, stressing her determination to continue dialogue with the Kingdom on all of these subjects. Talks between Mr. Akhannouch and Mrs. von der Leyen took place in the presence in particular of the Minister of Foreign Affairs, African Cooperation and Moroccans Abroad, Nasser Bourita, and the EU Ambassador to Morocco, Patricia Pilar Llombart Cussac.