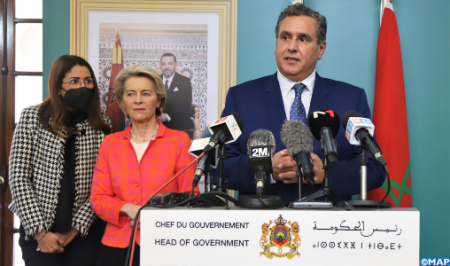 Morocco will work seriously to strengthen the strategic partnership with the European Union (EU), head of government, Aziz Akhannouch, said Wednesday in Rabat. “We will seriously ensure the strengthening of this relationship to which HM King Mohammed VI attaches very particular importance”, underlined Akhannouch during a joint press briefing with the President of the European Commission, Ursula von der Leyen, at the end of their talks, adding that Morocco seeks to move forward in its partnership with the EU through the implementation of major projects. The Kingdom and the EU, linked by a common future, share the same visions, he pointed out, noting that talks with von der Leyen were an opportunity to review the major projects launched at the initiative of HM King Mohammed VI and which make of social protection a priority. Mr. Akhannouch stressed, in this regard, that he had informed the European official of the importance of this project for Moroccans, particularly amid the spread of COVID-19. Talks with the EU official also focused on other priority issues, including green energy, digital transition, investment, economic recovery and the promotion of culture, said the Head of Government. For her part, von der Leyen reaffirmed the EU’s desire to continue to deepen the “strategic, close and solid” partnership with Morocco. Talks between Akhannouch and von der Leyen took place in the presence in particular of the Minister of Foreign Affairs, African Cooperation and Moroccans Abroad, Nasser Bourita, and the EU ambassador to Morocco, Patricia Pilar Llombart Cussac.