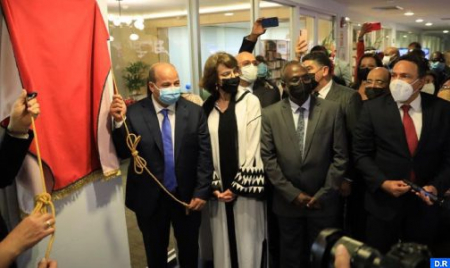 A Moroccan space was inaugurated on Thursday at the headquarters of the Parliament of Latin America and the Caribbean (Parlatino) in the Republic of Panama, which His Majesty King Mohammed VI has kindly given His August name “King Mohammed VI Library”. During the inauguration ceremony, which took place in the presence of a range of political and diplomatic personalities, it was proceeded to the raising of the flag of Morocco in front of the headquarters of Parlatino, to the rhythm of the national anthem. Speaking on this occasion, the Speaker of the House of Advisors (upper house), Naama Mayara, who is visiting the Panamanian capital (10-12 February) at the head of a delegation of the House, said that the “King Mohammed VI Library” is a symbol that embodies the richness and diversity of the cultural and spatial heritage of Morocco in the largest parliamentary gathering in the Latin American and Caribbean region. It is also a bridge to bring the peoples of Africa and this part of the world closer, said Mayara, quoted in a statement released by the Moroccan upper house. Mayara, who participates in the Annual General Assembly of Parlatino, as well as the summit of presidents of regional parliamentary unions in Africa and Latin America held in Panama, also noted that this space will be an important interactive digital platform of documentation and direct link with the national parliaments of the 23 member states of Parlatino. The inauguration ceremony was marked by the presence of the ambassador of the Kingdom in Panama, Bouchra Boudchiche, the President of Parlatino, Jorge Pizarro Soto, the Mayor of Panama City, Carla Garcia and the incoming President of Parlatino, Silvia del Rosario Giacoppo. Participants also include the President of the Parliament of the Economic Community of West African States, Sidie Mohamed Tunis, and the President of the National Assembly of the Republic of Djibouti and President of the African Parliamentary Union, Mohamed Ali Houmed.