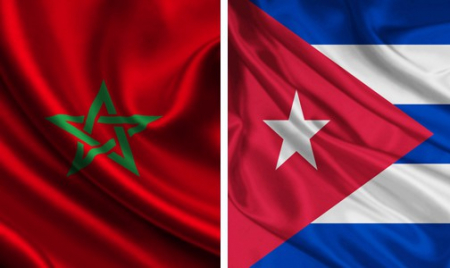 The President of the Republic of Cuba, Miguel Díaz-Canel Bermúdez received, Friday in Havana, Hicham Elaloui, who handed him his credentials as Morocco’s ambassador to Cuba. During this audience, which took place in the presence of the Foreign Minister, Bruno Rodríguez Parrilla, the Cuban President instructed the Moroccan diplomat to convey his distinguished greetings to His Majesty King Mohammed VI, and expressed his wishes for further progress and prosperity to Morocco and to the Moroccan people. President Bermúdez reiterated, in this regard, Cuba’s desire to strengthen its economic and commercial relations with the Kingdom, adding that the two countries have ushered a new phase of cooperation in various areas. For his part, Mr. Elaloui highlighted Morocco’s desire to promote cooperation with Cuba to cover all economic, social and cultural sectors, stressing the importance of taking advantage of mutual experiences in several areas of strategic development to serve the interests of both countries. Moroccan-Cuban relations have witnessed a sustained dynamic that seeks to establish solid bases for fruitful cooperation in various fields in order to achieve the ambitions of the two countries and the two peoples.