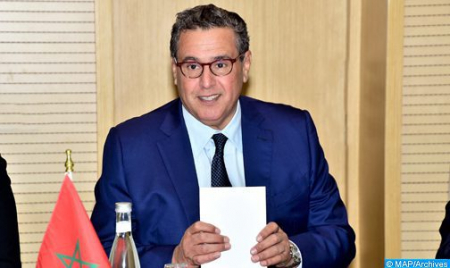 The Head of Government Aziz Akhannouch held talks, Friday in Brest (northwestern France), with his Tunisian counterpart Najla Bouden, on the sidelines of the high-level segment of the first international summit on the oceans “One Ocean Summit”. The two sides held a fraternal exchange on this occasion and discussed the prospects of the Moroccan-Tunisian High Joint Commission. Akhannouch represented the Kingdom at this three-day international event designed to mobilize the international community for the preservation of the oceans. He led a high-level delegation including the Minister of Agriculture, Maritime Fisheries, Rural Development and Water and Forests, Mohamed Sadiki and the Ambassador of the Kingdom in Paris, Mohamed Benchaâboun. The Head of Government took part in the high-level segment of the Summit, opened by the French President Emmanuel Macron. On this occasion, he highlighted the efforts and progress made by Morocco in the preservation of fisheries resources and the fight against illegal fishing, as well as the “enormous progress” made by Morocco under the leadership of HM King Mohammed VI, thanks to the Halieutis Plan. Organized at the initiative of France as part of its presidency of the Council of the European Union, in cooperation with the United Nations, the One Ocean Summit should give a “strong political impetus” to the European and international agenda of maritime issues, especially to achieve the multilateral negotiations that impact the Ocean and feed the conference “United Nations Ocean”, scheduled for late June 2022 in Portugal’s Lisbon. On the occasion of this international event, which saw the participation of some thirty heads of state and government, more than 100 countries expressed their determination to preserve the oceans by contributing to the “Brest Commitments for the Ocean”, alongside the UN Secretary General, the Director General of UNESCO and the Secretary General of the International Maritime Organization.