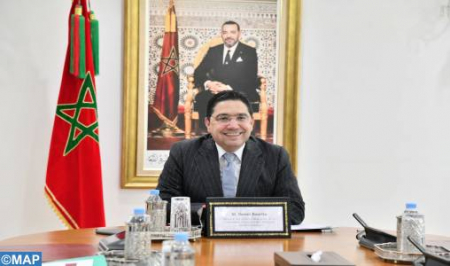 The Minister of Foreign Affairs, African Cooperation and Moroccans Abroad, Mr. Nasser Bourita, held talks on Friday through videoconferencing with the Minister of Foreign Affairs of Canada, Ms. Melanie Joly. During these talks, the two ministers welcomed the commemoration of the 60th anniversary of the establishment of diplomatic relations between the Kingdom of Morocco and Canada in 1962. This celebration will be highlighted through a series of joint events focusing on trade, human and educational exchanges developed by the two countries, especially for the benefit of the large Moroccan community established in Canada, said a statement from the Ministry. On this occasion, the two sides praised  excellent bilateral relations, expressing their willingness to enhance their cooperation towards a rich, solid and mutually beneficial strategic partnership by exploring the potential offered by the areas of common interest. In this regard, it was agreed that a joint roadmap will be set out during this year which will also see the launch of high-level political consultations, according to the same source. Mr. Bourita and Ms. Joly have also expressed their satisfaction with the consultation between the two countries on multilateral issues. Exchanges between the two ministers have also focused on regional and international issues, concludes the statement.